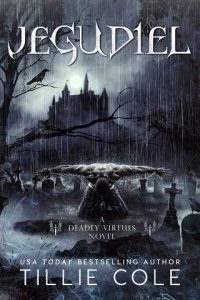 The Fallen: Comprises Gabriel, Raphael, Selaphiel, Barachiel, Jegudiel, Uriel, Michael. Seven men from Holy Innocents; later, Purgatory. Named by the Brethren after the archangels of the Catholic faith in hope that their holy names would inspire redemption. They became the Fallen in reference to their archangel names and their rebellious natures.

The Brethren: Sect born from the Catholic Church in Boston, Massachusetts. Exorcises boys of their innate evil, their thirst to kill, through invasive sexual and medieval torture techniques carried on from the Spanish Inquisition.

Holy Innocents Home for Children: Orphanage for boys near Boston. Named in tribute to the boys killed during Herod’s search for Jesus.

Purgatory: Secret home on the Holy Innocents grounds. Run by the secret Catholic sect the Brethren. Boys viewed as innately evil are brought there to be “exorcised” of their demons.

Eden Manor: The manor house on the outskirts of Boston inherited by Gabriel from his grandfather, billionaire/serial killer Jack Murphy. A secret location, protected by the government. Home to the Fallen.

The Tomb: Basement room in Eden where “Revelations” are conducted.

The Nave: Room where the Fallen gather for meals. Dinner each night is mandatory to strengthen the social bonds of the brotherhood. It is a way for Gabriel to assess his brothers and ensure they keep a grip on their humanity.

The Fallen’s Oath: Taken in the Tomb. Each brother of the Fallen signs a contract in blood with the sacrificial quill, committing themselves to the life of a Fallen and to the Ten Commandments that must be adhered to. Performed by Gabriel. Breakable only by death.

Diel opened his eyes, his hazy gaze traveling down the damp gray stone wall around him. His cheek was cold as it pressed against the freezing floor. His neck ached, the throbbing ghost of numbness snaking over his bare shoulders and the top of his spine. His head twitched, and he flitted his eyes to the iron bars that trapped him inside the cage.

The cage he knew all too well.

The monster within him rippled under his skin, waking from the forced sleep it had been plunged into. A spear of anger soared through Diel’s veins, overriding the aches and numbness and the lethargy of his muscles. Again. They had grounded him again. Lamed his monster again.

Jaw clenched and hands fisted, Diel used his waning strength to lift his torso off the slick ground and sat up. His pulse thudded faster and faster at the fact that he was in the fucking cage. But his pulse had no sooner started to race than the metal collar around his neck crackled against his already scarred and scalded skin. The electricity sizzled its warning, a sharp-fanged serpent, ready to strike the minute he lost control of his senses.

Diel breathed deeply and forced his body to still, the darkness within him to rest. Every inch of him became a statue, and the hiss of the collar lessened to a low-grade hum.

He fucking hated the collar. It was the bane of his existence. But it was a necessity.

Diel closed his eyes and thought back to how he’d got to the cage in the first place—a dream. Another fucking dream that had ripped him from sleep and had seen him racing through the manor looking for someone to tear apart, to sate the bloodlust of the monster living inside him.

No. Not just someone. His monster yearned for some very specific someones.

The Brethren. The motherfucking Brethren that he and his brothers had recently destroyed after they’d captured Maria, Raphael’s woman. The Fallen had headed to Holy Innocents, the school that had robbed them of their childhoods and fucked with their bodies and minds. They had descended, for the final time, to Purgatory, the place where they had been held as kids.

And they had burned it to hell.

The flames may have destroyed Diel’s childhood tormentors, but the rage following the inferno remained. The monster that lived inside him, seeking blood and pain and death, only grew stronger, thirstier, more intolerant of the collar that wrapped around his neck like a leash, denying both of them what they craved—death. Such beautiful, sadistic deaths by their hands.

Diel heard the sound of a pencil scratching on paper and turned his head to see Sela sitting on a chair at the side of the Tomb. He was sketching on a pad of paper, eyes fixed on whatever he was creating.

“Upper hallway, left wing,” Sela said, without taking his eyes off the pad. His long dark hair curtained his face as he concentrated on whatever picture he was purging from his creative brain onto the page. “Gabriel had us bring you down here until you awoke.”

The tendons in Diel’s neck corded. The darkness inside was more than pissed at being handled in such a pathetic way. He ground his jaw so hard that the sound of teeth on teeth made Sela lift his eyes and meet his stare.