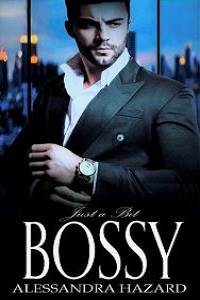 The day Nate Parrish met his demon of a boss had started inconspicuously enough.

He was just one of the many protesters gathered at the gates of the Caldwell Group’s headquarters. The tall building provided some protection from the cold October wind, but that was pretty much the only good thing about the situation. They were being ignored, the security guards simply monitoring them from afar.

“It’s useless,” someone in the thinning crowd grumbled. “They’re not going to come out and actually listen to us. We’re wasting our time.”

Others were nodding, looking dejected.

Nate frowned and lifted his sign higher. He refused to give up that easily. He wouldn’t let this soulless corporation destroy his favorite gaming franchise.

“Come on, guys.” Nate stepped forward. “Come on, we just need to be louder,” he said, looking at the other guys. There were only sixteen left, which was a little disheartening, but Nate didn’t let it show on his face. His dad always said that to make people believe in something you needed to look like you believed in it yourself, and Nate knew it was true. “We can’t let those assholes get away with it! Rangers deserve better! For Rangers!”

To his relief, the others seemed to become emboldened enough by his words and started yelling “YEAH, FOR RANGERS” at the top of their lungs.

Grinning, Nate did the same, and soon their shouts started attracting attention. Security guards approached them, demanding that they stop disrupting people’s work.

“We won’t leave until we are heard!” Nate said. “Tell those greedy assholes on the board to come down and meet us!”

The other guys made approving loud noises, clapping him on the back.

Encouraged, Nate shouted louder, “They won’t ignore us! They can’t silence us—”

The hush was instant.

He’d never seen black eyes before. He’d seen dark brown on the verge of black but never pitch, true black—outside of TV characters possessed by demons. This man had them: deep black eyes.

It took him a moment to wrench his gaze away and see the man those eyes belonged to.

Tall. Immaculate gray suit hugging the broad shoulders. Dark hair, finely shaped, heavy brows that made his hawk-like gaze rather unsettling. A five o’clock shadow, despite the early hour. There was something distinctly Mediterranean about his looks—Italian or Spanish, maybe Greek. The dimple on his chin was the only thing softening his appearance, but it only served to accentuate the hard, square line of his jaw.

From the way the man held himself, it was obvious he was someone important. He practically reeked of power and money, but Nate didn’t recognize him. To be honest, he wasn’t well versed in the executives of the Caldwell Group. The Caldwell Group was one of the biggest private companies in the country and its internal structure wasn’t known to the public. Nate could only recognize the CEO’s face, but that man definitely wasn’t him. Besides, Ian Caldwell was in a coma now. Everyone knew that.

“We want to speak to someone from the board of directors of the Caldwell Group,” Nate said when everyone else had failed to respond.

The black eyes seemed to bore a hole in him. “And who are ‘we’?” the man said, his expression vaguely condescending. “Why should a board member waste their time listening to some hooligans?”

Nate flushed. He looked at the other guys for support, but to his disbelief and annoyance, they were disappearing into the gathered crowd one by one. Fucking cowards.

“We’re representing the gaming community,” Nate said, even though he was pretty much the only one representing them at this point. He crossed his arms over his chest and glared at the man. “We won’t let you turn an iconic gaming franchise into a microtransaction-filled cash grab!”

The man’s expression was completely unmoved. “What is he talking about?” he said, still looking at Nate.

Someone behind the man cleared his throat. “It seems he’s talking about the new Rangers game, Mr. Ferrara. It’s one of the old intellectual properties that we bought—”

“Ah,” the man—Ferrara—said, his lips twisting derisively. “I thought he meant something else when he talked about an ‘iconic gaming franchise.’ An irrelevant IP no one even remembered until we reinvented it hardly qualifies as such.”

Nate’s hands clenched from pure rage. He stepped closer to the asshole and glared up at him, hating that he was two inches shorter, even though he was pretty tall himself. “The Rangers IP is a single-player RPG franchise with twenty years of rich history,” he spat out. “And your greedy company turned it into a soulless cash grab of a multiplayer game with dumbed-down mechanics for teenagers! The story of Rangers 5 was so laughably poor and incompetent, it could have been written by a fifteen-year-old—a stoned one.”

Ferrara stared at him with a strange expression: as if he were a bug, but a mildly interesting one. “Thanks for the feedback,” he said flatly. “I’ll pass it to our lead writer. Is that all?”