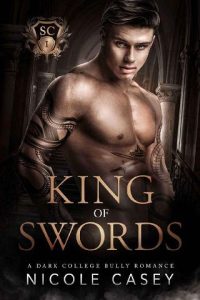 All of this—the good and the bad, the sweet and the bitter—began with a funeral.

My entire life to that point, I’d had the idea that Dad was a loner. While all the other attorneys at his firm had spent their off-hours golfing, attending charity galas, or drinking scotch in the corporate skybox during a Seahawks game—he had stayed home with me. He had done it ever since Mom had passed.

Looking back on those years now, I saw that he wanted to stick close to me. He remembered the dark places I had found myself in as Mom’s cancer got worse and worse. So, even when he wasn’t shepherding me to soccer practice or to Central Cinema for a midnight screening of the Rocky Horror Picture Show, he was always close by. If there were late-night legal briefs to review, he did it at the dining room table while I did my homework. If there was a weekend deposition, he called in from the SUV while watching my little league game.

Maybe it was a coping mechanism, telling myself Dad just didn’t like hanging out with other adults. Maybe I didn’t want to acknowledge that he was willing to put his entire life on hold to make sure I was okay.

Then I went to his funeral. It was packed with people I didn’t know. Guys he used to go out drinking with, old neighbors who had traded barbecue recipes with him, lawyers who had feared him in the courtroom—all with fond, hilarious stories of the Harry Quinn they knew and would miss terribly.

With each stranger’s hug and each loving anecdote, I inched closer to my emotional breaking point.

I was an orphan now. That didn’t seem possible. Hell, it didn’t even seem like being an orphan was something that happened in real life. Orphans toiled in Dickensian workhouses. They sang about hard-knock lives and became masked vigilantes. They didn’t stand around in a poorly lit Seattle funeral home, rocking awkwardly on their patent leather flats in an ill-fitting black shift dress, wondering how they had managed to miss both their parents’ dying breaths.

I was a pissed-off teenager when Mom had passed away. By the time she had slipped into morphine-hazy unconsciousness, I’d had my fill of human frailty. Being thirteen at the time, my eyes couldn’t help but drift to the trim twenty-something interns at the hospital. I would sit through my “Losing a Parent” support group and stare lustily at the gangly boys who were dealing with their own familial tragedies.

Don’t get me wrong. I felt like shit about it. But I was a ball of hormones and emotions. My mind kept telling me I needed to focus on my dad and the pain I was supposed to be feeling every minute of the day. My body wouldn’t cooperate, though. It wanted to mount every halfway decent-looking guy I encountered.

When Mom finally succumbed, I was out of the house, wandering our neighborhood, pretending I was literally anywhere else in the world. Dad had let me walk out that Sunday morning even though he knew the end was close for Mom. I guess he thought it would be easier for everyone just to let her slip away without me there.

Dad’s death was more complicated and somehow even worse.

The deal was pretty simple. If I graduated with a 4.0 average, he would let me escape for real. Other girls at my school wanted Jaguars and parties in Cabo. I wanted a month of backpacking in India.

Dad looked like he would shit himself when I said that was what I wanted for a graduation present. I’d never been outside the United States in my life, and the few plane trips I had taken were all with him.

“You nearly broke my fingers squeezing my hand on our last flight,” he warned. “Are you going to be able to make it twenty hours in the air on your own?”

Could I? I wasn’t so sure, but I knew for certain I would make that trip happen. I would escape to a strange, unfamiliar land where I didn’t have to be Biba Quinn, the nerdy tomboy with the dead mom. Maybe I would bathe nude in the Ganges. Maybe I would find a strapping local lad and make him teach this eighteen-year-old virgin every contortion of the Kama Sutra. I’d come home a woman, ready to take on the world.

Eventually, Dad acquiesced. That August, I boarded a direct flight to Delhi with a backpack, a dogeared guidebook, and visions of unspeakable exotic fantasies.

My grand adventure ended four days later. I awoke at 3 am in my hostel and found a dozen missed calls from my father’s assistant, Beverly. Bleary and confused, I called her back, knowing it was almost the close of business. Bev picked up after one ring.