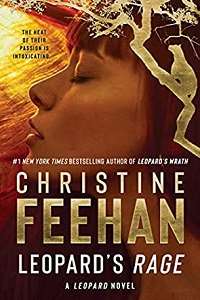 SEVASTYAN Amurov paced back and forth with long, angry strides, trying to rid his body of the dark, ugly, animalistic, moody edge his leopard brought along with his own bad temper. Over the years, he’d worked at staying in complete control. He’d succeeded in preventing that hot red volcano welling up inside him from showing itself to the outside world, but he’d never managed to eliminate the vile emotion. He knew he never would.

He was leopard. Not just any leopard. He was Amurov, born and bred in a brutal lair known for cruelty, for such savage practices that other lairs wanted nothing to do with them. He couldn’t blame them. The men in his lair took women to be their mates—not the women who held the mate for the leopards—but women who would give them sons. If they produced females or after they gave them sons, to show their loyalty to their lair, the men murdered their wives, usually in front of their sons. Often, they insisted their sons participate. Female children were either killed or given away or sold as brides to others who would later kill them after they produced sons for their husbands.

Sevastyan had been beaten most of his childhood, as had his leopard, in an attempt to make him stronger—a fighter for his lair. He was raised to be an “enforcer.” One who would be a bodyguard to the vor, or the one who would interrogate a prisoner for information. As he had grown up, that horrendous anger inside of him had grown, fed by his leopard’s rage.

His leopard was very strong and controlling him wasn’t easy. As the years had passed, unlike his cousins, his need for sex and domination had grown, not diminished. His leopard prowled closer and closer to the surface, demanding more and more, and those needs had turned sexual for him. It was a vicious cycle and one Sevastyan feared he was going to lose eventually. He often visited the underground clubs to ease the needs he had, but that was always dangerous when his leopard was so brutal. He had to be very careful that he didn’t allow any of the cruelty of his cat to spill over to his games with the women he played with.

Glancing at his watch for the tenth time, he hissed his displeasure. The woman from the landscaping company had blown him off. Again. That was three times. The first two times, at least she’d had the courtesy to let him know she couldn’t make it. It was an inconvenience, but she’d given him enough time that he hadn’t left Mitya, his cousin and boss, without protection.

He was Mitya’s bodyguard. Mitya had enough enemies that Sevastyan wasn’t about to take chances with his life. Already he’d been shot more than once, and leaving his protection to others didn’t sit well with Sevastyan.

Like always, when he was very upset, the anger in him translated to a deep sexual need that he despised. It rose up like a tidal wave, a hunger that took hold of him and wouldn’t let go until he rode a woman hard—and what was the difference between him and the other men in the lair he’d left so long ago? He despised himself for using women, no matter that they were fully consenting. He might visit the clubs and spend hours there doing the things he needed to do, but he was never sated. Never. His leopard roared his rage and deep inside, he did as well.

The truth was, Sevastyan wanted a woman of his own. A partner. A woman to love. A woman who held the mate for his leopard. That same gift his cousins had. He doubted if that was going to ever happen for him. His father and Mitya’s father both had seen to that with their torture and deviant training. His needs weren’t going to go away because he willed them to. Long weeks of trying. Months. Nothing had stopped that terrible craving. Nor would his rage. He had watched his cousins to see if they were like him. None of them were. Mitya was dominant, but he wasn’t in the least like Sevastyan. Still, his leopard deserved a mate.

He had one thing going for them. His leopard—and he—were in their first life cycle. That meant they could claim an unmated female shifter. They just had to find one.

Deep inside, his leopard snarled and raked at him with sharp claws, leaping suddenly in an attempt to take him by surprise and get out. It wasn’t the first time and wouldn’t be the last. Sometimes, Sevastyan thought his leopard, whom he affectionally called Shturm, meaning assault, would end his life by literally ripping him open and climbing out of him rather than shifting the normal way they exchanged forms.

“I’m having enough trouble staying in control without you adding to my problems,” he hissed in displeasure at the cat, raking his fingers through his hair, uncaring that it went wild on him. He was normally groomed to perfection, as part of his intimidating look.