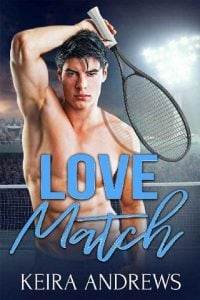 The linesman’s voice rang across the court, and Steve Anderson sat up straighter in the announcer’s booth.

Luke Rossovich swore and tossed down his racquet. After a few more expletives, he strode to the umpire’s chair, hands on hips. He peered up into the punishing Australian sun. “That ball was good. I know it, you know it, and everyone in this stadium except that linesman knows it.” The crowd hooted and hollered.

Steve and his fellow commentator grinned at each other. “Let’s go to the replay and see if Rossovich has reason for complaint. The ball looked like it might have been good to me, but our Court Cam will tell us for sure,” Steve said.

As the umpire tried to mollify the angry player, the home audience saw the ball catching the outside of the line. “Yep, that ball was good,” Steve confirmed. “But looks like Rossovich isn’t going to win this argument—the umpire isn’t going to overrule on such a close call. I know how he feels; I lost a few of those calls myself over the years.” Steve had been a decent player who had lucked into a Wimbledon championship one year when the top seeds were all eliminated early. He was milking that win for all it was worth, commentating for American TV and endorsing cheap tennis balls.

“This is bullshit!” Luke finally turned and stalked back to where his racquet laid on the court. His opponent, a young Swede, waited on the other side of the net. With the bad call, the Swede now had break point to win the set. Luke picked up his racquet and promptly threw it again, the cracking of the frame audible to everyone in attendance.

“Rossovich just cost himself the first set!” Steve exclaimed. “He threw his racquet hard enough to break it, and that’s definitely going to be a point against him. This kind of temper tantrum is something we haven’t seen from Ross in a few years, and it couldn’t have come at a worse time.”

Steve shook his head and whistled. “This just might not be Luke Rossovich’s day.”

Luke tipped his head back, his eyes closed as the water cascaded down his body. His muscles ached and the joint in his knee was uncomfortably stiff. He tried to lose himself in the hot shower, tried to let go of his spectacularly shitty day.

“Fuck!” He slapped the tile wall. It was no use. He’d lost in the second round of the Australian Open. The second goddamned round. At thirty-four, he sure as hell wasn’t getting many more chances, and he’d blown this one but good.

Luke opened his eyes and peered through the steam. A young blond man turned on the water a few showers down. Luke thought for a few seconds and remembered his name and bio. Jesse McAllister: twenty-three years old, NCAA champion out of UCLA. Had cracked the top one hundred in the world after his first two years on tour, which wasn’t bad. Still, he was supposed to have been America’s great new hope, and so far he hadn’t quite lived up to expectations.

“Yeah. You could say that.” Luke wasn’t really in the mood for small talk.

Jesse opened a bottle of shampoo and lathered his hair. “You know, you should play more doubles. Your net game is suffering a bit.”

“Oh, really?” The nerve of this…kid coming in here and offering him advice.

“I just noticed that your volleys are pretty flat.” Luke was glad to hear a note of nervousness in the kid’s voice.

“Well, they weren’t too bad when I won Wimbledon. Three times. Not to mention this tournament once.” Granted, that was four years ago now.

Jesse rinsed the shampoo out of his hair and turned the water off. “No argument here. Look, I was just wondering if maybe you wanted to play doubles at Indian Wells. I think our games would mesh really well. But forget it.” He slung his towel around his slim hips. He was around five foot seven and slight, but toned and in great shape. He didn’t have a power game, but if Luke recalled correctly, he made up for it with his speed. “See ya.”

Then he was gone and Luke closed his eyes again, wishing he could just be home in his bed in Malibu. Instead, he had yet another hotel room to go to, with an ugly duvet and nouveau art on the wall that was all the same, no matter which city he was in. He sighed and turned the water up hotter.

The airport lounge was packed, and Luke pulled his baseball cap down further over his brown hair. Mirrored sunglasses hid his green eyes, and as he folded his long, lean frame into a chair, he hoped no one would recognize him. He wasn’t in the mood to put on a smile and sign autographs. But at six feet, two inches, with a taut, finely muscled body and a face that People had called “movie-star handsome” on more than one occasion, Luke tended to stick out in a crowd.