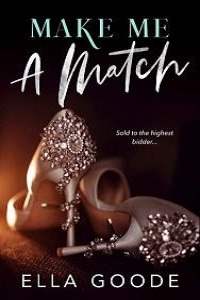 “I’m not doing it,” I tell my sister and mother, both of whom are looking at me like I killed the non-existent cat.

“Pretty please?” Caro places her hands under her chin and bats her eyelashes. Ordinarily I would kill for my baby sister, but this ask is too far. I shake my head no.

“It’s for charity,” huffs my mom. Her delicate hands wave in the air. “How can you be so Scroogelike?”

“First, I’m not the one with the big checkbook. That would be you.” I tip my head toward Mom. She started selling handmade clothes thirty years ago and grew her business, and her kids, into a multinational wedding dress business. “I’m a high school history teacher,” I remind them.

“Tell him that this is painless,” pleads Caro.

“It’s painless,” her fiancé, Ben, repeats dutifully but behind her back he grimaces and slowly shakes his head in silent warning. Caro senses this betrayal and jabs him in the gut with an elbow.

“If you had a girlfriend, of course I wouldn’t ask this of you,” murmurs Mom, “but since you are single, I don’t see how this is a problem. As Ben says, it’s harmless”—awful he mouths—“and it might even be fun.”

“Are you punishing me because I’m childless and single?” I say.

“How can giving back to your community, raising money for sick children, be a punishment?” Mom’s finely tweezed eyebrow arches into her forehead.

“Yeah, don’t be a kid killer,” Caro chimes in. “Ben would do it if we weren’t engaged. He did it for five years, and he’s perfectly fine.”

I fake a cough to cover a laugh.

Ben pushes away from the table. “Chief got some special cigars from the mayor for saving his daughter’s cat. Gave a couple to me. Want to test them out?”

I jump to my feet. “Yeah. Sounds like good brotherly bonding shit.” I point to my sister. “Don’t complain. You’re always asking us to do this.”

“Yeah. Yeah. Go on and smoke your smelly cancer sticks. Mom and I will write up your auction text.” She shoos me away while Mom looks on with a smug expression.

I hesitate but decide that I don’t want to know what my mother is up to. She’s tried matchmaking a dozen times before, and nothing’s come of it. Surely she doesn’t think that someone who is buying me in an auction is going to be my one true love.

“How bad is it?” I ask Ben when we reach the deck.

He pulls two cigars out of his pocket and hands one over. “Depends on the age of your buyer.”

I bite off the end of the cigar and spit it over the railing. Ben holds the lighter for me. “The young ones are the worst, huh?”

“Ha!” He barks so loudly I nearly jump out of my shoes. “I wish.” He takes a deep drag. “Nah. It’s the old ones you have to be careful with. They’ve got no restraint and fewer morals. My third auction—or maybe it was the fourth one—the buyer had to be eighty if she was a day, and we weren’t even out of the building before she started mauling me. I told her that the winning bid got picnic dinner at a park, and she said she was going to save me some money by offering herself up as a meal.”

I put a hand on the deck railing to steady myself. “No.”

“Fighting off Grandma all night wasn’t even the worst of it.”

A sweat breaks out across my forehead. “I don’t know that I’m prepared to hear this.”

“You aren’t.” He takes another draw and blows out a stream of smoke. “The last year, I went for the top dollar in the auction. Twenty-five Gs.”

I almost choke on my saliva. “Twenty-five grand?”

He nods solemnly. “It was twins, and they wanted their money’s worth.”

“I told them I’d mow their yard for a year if they promised to leave me unmolested.”

When Caro brought Ben home for the first time, I wasn’t impressed. She’s going to inherit a billion-dollar wedding business, and he was a blue collar worker who often had soot under his fingernails. I learned quickly he was a good guy who was completely smitten with my sister. After giving him the warning that if he ever hurt Caro, I’d make him eat his own testicles, we got along fine. Plus, their wedding planning consumed an enormous amount of my mom’s attention, and for that I’ll always be grateful. It was a year’s reprieve of her constant questioning of when I was going to settle down and give her some grandbabies. Even if he was a dick, though, I don’t think I would’ve wished these experiences on him.

“Did they take you up on your offer?”