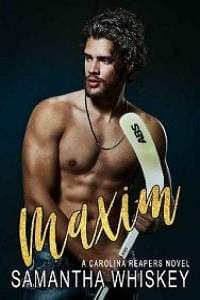 “What’s up, Mila?” I asked, holding the cell phone between my cheek and shoulder as I finished tying my skates. There were very few people I’d take a call from in the locker room, especially since the service was shit in here, but the only soft spot I had in my entire soul belonged to my little sister, Mila. And fine, that spot extended to her best friend, Evie, but only because the blonde was as loyal as they came to my sister.

Loyalty was something I respected above all else.

“Teensy, huh?” I huffed a sarcastic laugh. Whatever she needed wouldn’t be small. Mila didn’t do small.

“Itty bitty,” she said, her tone so sweet that my brows rose in suspicion.

“Just promise me you’ll say yes.” If she was hesitating, it had to be big, considering she knew there wasn’t anything I wouldn’t do for her.

“You want me to say yes before I even know what you’re asking?” I finished tying my skates and sat up, watching my teammates head out of the locker room.

Jansen Sterling stopped on his way out, his helmet perched under his arm, a look of concern on his face. I put my finger up in the universal gesture of hold on, and he nodded, holding the door as more of our teammates headed toward the ice.

“Fine. Favor granted.” The corners of my mouth tugged upward and I shook my head.

“Wait!” My eyes flew wide. “What do you mean home?” But she’d already hung up. Mila and I didn’t live together. She had an apartment in downtown Charleston, close to her graduate school, and I had a house in the subdivision we jokingly called Reaper Village, where most of our team lived. So what the hell did she mean by see you at home?

“Everything okay?” Jansen asked as I tossed my phone into my locker.

“Mila needs a favor,” I explained, grabbing two of my sticks from the rack.

“Anything I can do to help?” he asked.

I paused just before the door and stared at him, taking in the familiar shape of his build, the set of his eyes, the harsh line of a chin I knew all too well…because it was mine, too, a gift from the man who had given his genetics to both of us, but “fathered” only one. If you could call being raised by Sergei Zolotov fathering.

Sterling stared back at me.

Ah, there it was, the awkwardness that still reared its head between us every now and then, even after being on the same team for the last two years.

We were a work in progress.

“No,” I answered him, shaking my head as I walked through the door, slapping him on his shoulder. “But I’ll let you know if it’s something I can’t handle.” I wouldn’t, of course, but it was the thought that counted, right?

We headed out to the ice and proceeded to get our asses smoked by Coach McPherson. It didn’t matter that it was New Year’s Day, or that the rookies were noticeably hungover—McKittrick had been up-chucking in the bathroom right before we dressed—we were the team to beat this year, and Coach was doing his best to make sure it stayed that way.

The losses had come all season, but the wins were far outpacing them, and it was evident in the amount of fans currently in the stands, watching us practice.

No one was ready to jinx it, to even allude that we were headed anywhere that resembled a shiny, silver…chalice, but there was a feeling in the air, a palpable excitement that none of us could deny, even when sweat dripped from every inch of skin on our bodies and every muscle screamed in protest like they did now.

Coach blew the whistle and we all stopped, our chests heaving with exertion as we turned toward where he stood at center ice.

“That’s what you get for drinking like it’s the off-season,” Sterling replied as he skated by.

“He’s not wrong,” I added with a shrug before skating off toward the bench. I stepped onto the mat and headed through the tunnel toward the locker room.

I’d been a little slower than usual today, but I chalked that up to only getting six hours of sleep last night. Maybe I hadn’t been throwing back shots with the rookies, but I’d definitely stayed out celebrating later than I should have.