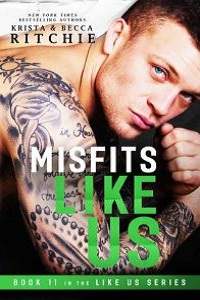 Life isn’t something complicated to me. Been living for twenty-nine years. Think I can survive for one more. I’ve got that ruthless confidence that makes love to merciless independence, and my head isn’t in the clouds with some over-hyped optimism. I just know if I’m in the dark, I’ll dig my way through shit to find the light.

Self-reliance is the best drug my parents ever gave me.

Elbowing the front door shut, I’m quiet as I enter the Philly house. Eight bedrooms. Plenty of bathrooms. House is a funny way of saying mansion.

Though, not that many call it one. It’s not swimming in crystals and marble like the Cobalt Estate. It’s cozy with furniture you’d see in family sitcoms. Shelves aren’t stocked with first edition novels in different languages. Just comics.

Lots and lots of comics.

It’s still strange being here and not with the Cobalt Empire. I protected two Cobalt brothers before I was assigned to protect a Hale. Thought I’d be assigned to every Cobalt before I was put on a Hale’s detail.

Mainly because of their dad.

Mostly because of him.

Goals—I make them often. Most people probably think I have none. But I got ‘em.

It’s Friday. I’ve succeeded all week. I deserve a cheesecake, thank you very much. Might go get one tonight. What’s stopping me?

I push back the nagging thought. He’s not stopping me from eating cheesecake. He’s not. And no one likes a nag. The kind that poke at your brain and make you rethink yourself at every turn—those gotta be the worst. I don’t like rethinking everything.

“I’m at the Hale House. Where you at?” I ask in a whisper, phone propped to my ear with my shoulder. It’s the ear without the tactical earpiece. My hands are full of Earth’s greatest nectar.

“New York. Trying not to wake up my baby sister,” Oscar tells me quietly and spits in the sink, probably brushing his teeth this early a.m.

“Need some diapers?” I ask lightly, a grin forming. I hear his grunt, like he wants to retort but can’t with a mouth full of toothpaste, so I go on. “Gotta get the pureed chicken and gravy for your baby, man. Can’t let her starve. Only the best for Baby Jo.”

He mumbles out, “You have recent experience eating baby food?”

“Nah, that shit’s expensive.” I did once look up the cost of baby food. When I thought I got a girl pregnant. Baby wasn’t mine. Didn’t even sleep with her. Turns out, the baby belonged to my uncle in prison, and now that baby has been adopted by Farrow and Maximoff Hale.

Life does have happy endings that way. I have to believe in them. Or else what’s the point, right? Some great endings just take an arm or a leg to reach.

I hear the faucet.

Oscar spits again. “You say any of that around Jo and she’ll have your nuts rolling on the floor ten-feet away from your dick, and I’ll watch and laugh.”

I will too. “Sounds like your sister just wants in my pants.”

“No, no, no. Sister jokes are officially off-limits. Legitimately, you’ve met your quota, which should be zero.” I don’t usually bring Joana into things.

I know her birthday is in the fall. Late October. Next month, actually. I try not to forget things like that when it comes to the people who matter to me. Oscar matters. Which means so does his almost twenty-one-year-old sister.

“And she’ll always be my baby sister to me,” Oscar concludes.

“Yeah, I know.” Even though I’m an only child, I understand the power and bond of a sibling. And not just because I’m surrounded by families.

Families that I’m dedicated to protecting.

While I walk through the Hales’ foyer, I’m still trying not to be loud. So I don’t ask much about Joana living at his Hell’s Kitchen studio, which security (aka Akara Kitsuwon) pays for. I’m guessing she’s not moving out anytime soon. Free place to crash. Extra time spent with her big bro.

Oscar is at his studio only when Charlie Cobalt is in New York, and then when Charlie is here, Oscar stays at the Philly apartment he owns with his husband, Jack.

The life I lived in New York, rooming with Oscar and protecting Beckett Cobalt while he protected Charlie, that doesn’t even feel that long ago. Though, I know it’s been almost two years.

In two years, my best friends both got married.

And then the bad:

In two years, I wiped out my bank account for an uncle that I don’t even like.

In two years, I’ve sleepwalked more than I have in the past ten.

In two years, I haven’t been able to stop thinkin’ about her.

Oscar keeps chatting. “I have ten minutes before I go chase Charlie around Manhattan with my husband.” I heard Jack is filming some kind of travel project for Charlie while We Are Calloway is in post-production. Editors are tweaking the Summer Olympic footage for the newest season.