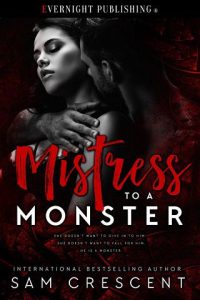 Milah Russo glanced around at the party her father had thrown to honor her eighteenth birthday. This wasn’t really for her. He pretended it was because he liked to show off his wealth and power.

Staring at the people present who were not his friends, she felt a little sick to her stomach. These kinds of celebrations were never good. All they did was bring out the worst in people. None of them were interested in her.

They were all here to get in her father’s good graces, but Antonio Russo was not interested in making friends. Ever since her mother’s death at the hands of the De Luca family, their sworn enemies, he’d been on a warpath, determined to spill De Luca blood. This had been going on for the past five years.

She didn’t understand why. It wasn’t like there was any love between her parents. They had fought constantly. Her father was a brutal man, and he’d beaten her mother regularly.

As she watched him tonight, surrounded by many scantily clad women, he sickened her.

She hated being his daughter, but there was no way she’d ever let him see the truth. Hiding her feelings was what got her through.

Milah declined several opportunities to dance, and instead made her way out into the garden. Like so many other times before, there were plenty of guests. All of them pretty much tripping over themselves to greet her. She wasn’t rude, so she smiled and nodded at them all, not caring one bit about doing her duty.

They would talk nicely to her face, but behind her back, it would be scathing. From the way she looked to how she dressed. Some felt she wasn’t fit to be a Russo. Her mother had been a beauty. Considered to be the most beautiful woman in the whole country. Milah only possessed her raven hair. Where her mother had been slender, raven-haired, with brown eyes, Milah was curvy, with the same hair and blue eyes. She never bowed her head in the company of others and always listened to what surrounded her.

Rumor would have it that her mother turned a blind eye to everything. Ignoring all the warning signs.

Milah would do no such thing. In her world, she knew women were treated as objects to be bought and sold at the whim of men.

Everyone had thought her mother a fool, but Milah knew differently. Her mother had known the cost of bearing a daughter as opposed to sons. So while everyone treated her like an idiot, behind closed doors, her mother trained her well. She wanted a daughter who could fight back. Who wouldn’t be afraid of the men her father brought, and also, who would be able to defend herself, unlike her mother.

She trained with the best guards. Learned from the best the Russo had to offer, and now on her eighteenth birthday, she had never felt so alone.

Milah found a small maze at the bottom of the gardens and decided to have a few moments to herself before she needed to start worrying about faking it again. Being around these people for longer than a few hours was tiring.

She wanted to leave. To go back home where her father never visited and just live her life in peace.

The time would come when he’d use her, but until then, she hoped to find a means to support herself. To run from the Russo life. Even if it meant faking her own death and being reborn, she’d gladly do it.

Wrapping her arms around her body, she stared up at the night’s sky. The moon glowed down, and it made her smile.

Closing her eyes, she stood perfectly still, and in a rare moment of her life, she felt a sense of peace. These times were always few and far between in her life. She had learned long ago to not always expect them, but to enjoy them while they happened.

After taking a deep breath, she released it slowly, counting the seconds.

“Well, well, well, if it isn’t the rare beauty herself.”

The dark voice sent a shiver down her spine, and not in a good way either. Opening her eyes, she stared straight ahead, feeling the man approach. He was the enemy. Her senses told her to be on high alert. She didn’t have a single weapon on hand.

Gritting her teeth, she tried not to react.

“Are you not going to scream?” he asked.

His warmth seeped through her dress, and she tensed up as his hands suddenly appeared. The moon provided enough light for her to recognize the De Luca markings on his knuckles, but there was only one man in the entire family who would have that kind of ink.

Her mother had warned her about him.

Damon De Luca. The most feared and oldest son of the empire. Their sworn enemies.

What was he doing at her party?