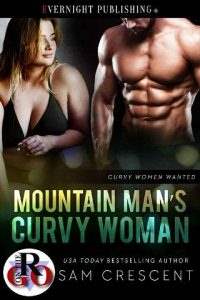 There was absolutely nothing wrong with his masterful presence. Just the sight of him alone, chopping wood for the fire, was enough to fill her with a need for sex and she’d never felt that. No man had ever made her think of sex and fucking, such raw, wanton desire.

Meghan Young wrinkled her nose as she pressed delete on her laptop. This was insane. Staring out the window and writing about the mountain man who’d taken her in was just crazy.

Sitting back in her chair, she tried not to look at those shoulders. It was snowing outside and Mount Row had built up a sweat. After stepping away from her desk, she paced the room. Her agent and publisher had advised she take this much-needed break. In fact, William had insisted on it. Had told her that she’d been working herself to the bone for too long and now she needed to get away to the middle of nowhere.

By nowhere, there was no internet connection. The house she’d been sent to was an old friend of William’s, Mount, the current concentration problem she was having.

She sat back down again so she could no longer stare at him out her bedroom window.

Something had happened to Mount, and he’d withdrawn from all social life. He made a living, though she didn’t know how. But his home was up in the mountains, away from any town or city. In fact, people who wanted to find this place would have to hike. He’d picked her up from the airport, bringing her back to his place. His driveway was secluded and gated. All of his land was fenced as well, and he’d told her she wouldn’t need to worry about the potential for trespassers or hunters. He had everything under control.

There was electricity, just no wi-fi. He didn’t even have a cell phone. There was one single landline, and that was all.

He had no interest in online life.

William hadn’t told her why, and seeing as she’d only been at Mount’s place for a grand total of two days, neither had he.

No man had ever impressed her but Mount was different. He didn’t seem to give a fuck about anything. He came and went as he pleased. His home was her home for as long as she wanted or needed it.

Getting to her feet again, she couldn’t help but watch as he carried several large pieces of wood over to the stack.

Those muscles. They were a dream.

Closing her laptop, she made her way downstairs to make a cup of tea. She’d become partial to the brew during her stay in England and loved to have a nice cup. The kettle had just finished whistling as Mount came in.

She’d never been much of a people person so Mount’s grunt was more than welcome.

He made her a little nervous. Not because he was so tall and muscular, it was her reaction to him. She wasn’t used to having so much … feeling for a man. Any man. She wasn’t a virgin or anything. She’d had a relationship or two. At thirty years old, a part of her had hoped to have already settled down by now, but it hadn’t happened. She hadn’t even come close to it.

“I’m sorry. I still don’t know how to make coffee.”

“It’s fine.” His voice was so deep. She had to pause as she listened to him, forcing a smile to her lips, and put the large cup in front of him. He blew across the surface before taking a big sip. “I’m heading into town today to gather some supplies. A cold snap is heading in. There’s concern for snow. It could get deep and once it hits, I can be up here for a couple of weeks, even a month or two.”

“Wow,” she said, sitting down across from him. She was a curvy woman. Had all the big hips and tits to make her so, but next to Mount, she felt delicate, small.

“You’re happy with me coming into town with you? Is that allowed?” William had told her he’d given Mount strict instructions for her to relax, rest, and write when she needed. So far, she had tried to avoid Mount and only watched him from her bedroom window. The man was always doing something. It was impossible to keep up with him. Most of the time, he was surrounded by large, dominating dogs. They were a little scary. Actually, they were scary before she had gotten to know them. They were large, cuddly bears, and she adored them now.

Mount laughed. “Of course it’s allowed. I’m not letting you out of my sight. We’re going straight to the store, that’s it. You can tell me what it is you want to eat as well. Bear in mind, we’re going to be trapped here for some time.”