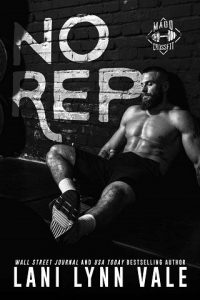 Will work out for food.

I grimaced at those words. “I guess.”

Madden grinned. “Come on, it’s not going to be that bad.”

Madden had forced me out of the shadows. He’d also forced me into instructing a bootcamp class at our CrossFit gym.

I didn’t teach classes. At least not with any consistency. Madden taught them, and, if upon occasion, he needed an assist, I would reluctantly take over. But only until he was able to do his job.

I was a silent partner.

I lurked. I worked in the office. I worked out on my own when there were no other classes or people there. I went home and worked some more. What I did not do was teach classes until forced.

Why I’d agreed to teach this bootcamp, I didn’t know.

Call it a weak moment. My friend since we were kids had shamed me into doing it.

I can’t do it myself. Everyone else is busy. This will be good for business.

All things that he had thrown at me to get me to do it.

But there’d been one woman, one of our veteran members, who’d all but implored us to start the bootcamp class so that she could have her sister join. And Madden, into her since she’d joined, hadn’t had the heart to tell her no.

“It’s going to be really bad.” Sophia, Madden’s daughter, and my might-as-well-be daughter, looked over between the two of us. “Dad, Tay doesn’t teach classes. He works, works out, and then goes home where he works some more. You’re actually taking him away from another bestselling book right now.”

I was an author of horror fiction.

At first, writing had been a way to get me the fuck out of my own head and into someone else’s. Someone that had a hell of a better life than me.

But eventually, when I sent my book to the publisher and it got accepted, my entire life changed.

Well, the money in my life changed.

Though, at this point my thoughts and scary dreams were serving a purpose. I just wrote those into my manuscripts rather than allowing them to continue to scare the absolute shit out of me.

The door to the gym opened, and I groaned.

I didn’t look behind me, mostly because I didn’t want to fuckin’ do this.

But Madden would do the dirty work, he’d promised.

Getting them signed into the system, signing their waivers, getting them ready for their first day.

All I had to do, according to him, was teach the class.

I could do that.

“You’ll be okay, Tay,” Sophia whispered into my ear.

I looked over to find her staring at me with the biggest blue eyes I’d ever seen.

When I’d first come into Sophia’s life, she’d been a baby. A tiny, very small baby.

Her dad had become part of my extended family. Madden, Sophia, his daughter, and Jasper, his son. Our other best friend Haggard, and his kids, Clem and Boston.

I wasn’t sure why I’d latched on to Madden so hard. I had just been adopted by my current family, just like Madden had been taken in by his foster family. After years of insecurity, I had needed a friend.

I’d been just a teen myself, but the moment I’d seen Madden, so fuckin’ mad just like me, I’d instantly stuck out my hand and introduced myself.

Then I’d told him that he needed a haircut because he looked like a douchebag.

There were times over the years that Madden—like Haggard, who’d entered the military young to help support his young kid and wife—had gone his own way, but we always made our way back to each other.

After Madden’s divorce, he’d come home and moved into my place. After my divorce, I’d gone to his place. When we’d graduated from college, and neither one of us really knew what we wanted to do, we’d moved in together.

And that included his kids.

I didn’t have any of my own, and though his kids were both adults now, that didn’t change how I treated them.

I was the really cool uncle.

The one that would give them absolutely anything if they only asked.

“So, Dad wasn’t going to say anything, but I think you need to know.” Sophia bit her lip.

I grumbled under my breath. “Please don’t say what I think you’re going to say.”

I had a feeling. That was why Mad had asked me to teach this class. Begged me.