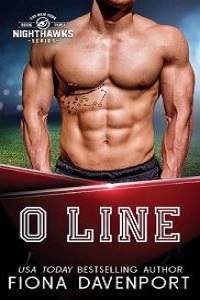 I didn’t do blind dates, but I was roped into one because it was impossible to tell my friend’s wife no. Naomi was a sweetheart, but she was also pregnant and hormonal. If I made her cry, Prentice, the New York Nighthawks’ quarterback, would beat my ass to a pulp—it didn’t matter how well I protected him on the field as an offensive lineman.

My reluctance didn’t have anything to do with Ember, my date. I’d met her a time or two, but we hadn’t really spoken beyond hello and goodbye. I didn’t know her well enough to be sure we’d be suited to each other.

In the end, I agreed because if this date went well, then it could solve my problem for the Spring Ball—a charity event for Memorial Sloan Kettering Cancer Center—next month. Plus, I knew Naomi wouldn’t set me up with someone she didn’t believe I’d at least get along with.

It was a beautiful spring night in New York City, so I decided to walk from my Upper East Side condo to Daniel, the restaurant where I was meeting Ember. Coming from a high-society family meant I had connections to all the best places, though I rarely capitalized on it. But I’d wanted to make a good impression on Ember so she’d consider coming to the gala with me.

My best friend and roommate, Clay, had sent me a ridiculous meme about blind dates, and I was responding as I neared the entrance to the restaurant. With my head down, I wasn’t paying much attention, but then I heard someone speak, and my whole body erupted in flames. My gaze snapped to the podium, where the husky, sexy as fuck voice had come from, and I froze.

Curly, honey-blond hair bounced around the most beautiful face I’d ever seen. Her pale-green eyes were surrounded by thick lashes, making the color pop. And they sparkled as she smiled at the couple she was talking to. That smile…fucking hell, those plush red lips were lethal. A man could die happy with them wrapped around his cock.

She stepped out from behind the podium, and I had to force myself to keep my jaw from dropping. Her heart-shaped face made her look sweet, but as my perusal slid lower, I saw a body made for sin. She was tall and thick, perfect for a left tackle who stood over six and a half feet and was three hundred pounds of pure muscle.

Her curves made my mouth water. She had large tits that would spill out of my hands and were perfect for feeding big babies like mine would be. Wide hips I could grab onto while I impaled her on my long, fat cock. And legs that went on for miles.

Then she turned to lead the couple into the restaurant, and I almost fell to my knees at the sight of her epic ass. Big and round, I could leave the print of my entire hand on one of those squeezable cheeks.

When she disappeared inside, it was like a spell had been broken, and I shook my head as I tried to make sense of my thoughts. Since when was I into spanking? To my shock, just thinking the word had my dick—which had become fully erect during my inspection of the gorgeous woman—suddenly leaking.

I stalked to the hostess stand to hide my physical reaction and stealthily adjusted myself so that it was less obvious.

While I waited for my hostess—Wrenley, according to her name tag—to return, I knew I wouldn’t be able to go through with my “date.” My brain was already trying to figure out how to convince my dream girl to go out with me instead. I began racking my brain for reasons to cancel on Ember without being a complete asshole. I couldn't pretend to be sick if I wanted to stick around and talk with Wrenley. Maybe I should just be honest? Before I could make a decision, my woman returned.

She glanced up at me, and her eyes widened as her cheeks darkened to crimson, and her mouth parted. Satisfaction rolled through me, knowing she was as affected by me as I was by her.

“Hello,” I said softly, giving her my most charming smile and then enjoying how her blush darkened and her little pink tongue darted out to wet her lips. “I have a reservation under Stallard.”

“Um, okay. Let me see.” She glanced down at her book, and after a few seconds, her body stiffened. When her eyes returned to me, they were filled with disappointment.

Shit. Shit. Shit. I wanted to damn Naomi for putting me in this situation, but I couldn’t because then I wouldn’t have met the woman meant to be mine.

“A table for two. How romantic,” she murmured.