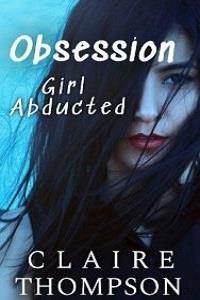 Alana is naked in the white, empty room, her wrists strung high above her head, pulling her body taut. She lifts her head and whispers, “Mark. I love you. I’ve always loved you and only you.”

“And I love you, Alana, my beloved. My slave girl.”

Her legs are spread wide, held in place by a long bar of gleaming metal, attached cuffs securing each ankle. Her body is marked from the whip, each welt an offering. “I want to suffer for you, Sir,” she says in her low, husky voice. “I was born to suffer for you.”

She drops her head again, her dark shiny hair tousled and damp with perspiration. He brings the whip down, striking her supple flesh again and again, coiling it around her thigh, her breasts, the perfect globes of her ass. Her cries echo in the empty room.

Mark lay on the bed, his hand on his cock as he watched her on the screen. Alana Hunter was laughing toward him, her dark blue eyes beckoning him as he sighed. He’d watched this video a dozen times or more, but he never tired of it. When the male character began to unbutton Alana’s blouse, Mark moaned. He should be the only one to do that.

Soon he would be.

Soon Alana Hunter, adored by millions, would belong to Mark and Mark alone. On the screen, Alana pouted at her faux lover, her lips like ripe fruit begging to be bitten. It wouldn’t be long now, and Mark would be the only one to touch that lovely face, kiss those luscious lips, whip that perfect ass.

As Mark watched Alana surrender herself to her on-screen lover in the climactic final scene of the adventure-love story, longing dragged like a knife through his gut. He groaned as he pumped his cock, stroking in time to the movements of the lovers on the screen.

When she looked at the camera—at him—there was a sultry “I dare you” quality in her expression, but Mark knew she was an innocent. He’d followed her career for the past seven years with avid attention. Beyond the movies, he read every interview, scoured the internet for every story, feature and hint of gossip he could find, and wrote for several online blogs that catered to Alana Hunter fans.

Two years ago, he’d finally managed to get tickets to the screening of her latest movie, and that was the day he’d decided to stop living on the sidelines of Alana Hunter’s life. Seeing her in person had been the most thrilling moment of his existence to that point.

She had worn a simple but elegant blue dress that clung alluringly to her perfect curves. She’d walked with the easy confidence of the beautiful and adored along the receiving line, stopping every few feet to be photographed and to greet her fans. When she’d turned her dazzling smile on Mark, electricity had sparked between them. Though she looked away a moment later to smile at the next fan, they’d shared something unique.

It was at that moment he began to devise his plan.

The credits were rolling across the screen and he still hadn’t come. Closing his eyes, he let his favorite fantasy unfold once more…

Alana lifts her head, trying to focus those violet-blue eyes on her Master. Her breasts heave as she tries to catch her breath. “Thank you, Sir,” she gasps.

“For what?” Mark demands.

Mark could almost feel Alana in the room with him, her perfect mouth wrapped around his cock. With a grunt, he exploded onto his stomach and chest. “Once I own you, Alana,” he said aloud, “I’ll have you lick me clean.”

The autumn morning was crisp, a hint of snow in the air. Mark stood across the street from the studio where Alana Hunter was having her photo shoot for a women’s fashion magazine. It should have been over by now. He glanced impatiently at his watch. He recognized her driver’s car, a nondescript black sedan, its windows tinted to keep out prying eyes. It was parked near the back entrance of the studio on a narrow side street, ready to whisk away the woman of his dreams.

His heart leapt as the door opened and Alana came out, tossing her dark hair out of her face as she pulled her jacket more tightly around herself. She strode quickly toward the parked car. The passenger door was opened from inside, and she slipped in, shutting out any would-be autograph seekers or paparazzi before anyone even realized she was there.

Mark knew where she was going. It being midday in Manhattan, he knew he would get there as fast, if not faster, on foot.

Today she would be meeting with Lisa Carter, her personal assistant, for lunch at Caliente, the Mexican place on 6th Avenue in Greenwich Village. After lunch, she would go for her massage at Chez Paul, and then off to the studio to rehearse or do whatever she did in there. So far, he hadn’t been able to get into that studio. The damn security was too tight. He didn’t care, though. What did it matter?