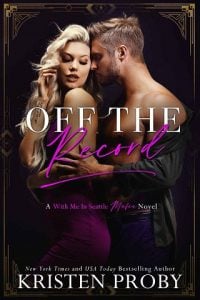 Rafe Martinelli. Also known as the love of my life. The man of my dreams. My one and only. I know, I’m only twenty, and my cousin Nadia would tell me that it’s completely ridiculous to think that I could meet my soul mate in college when I should be out sowing my wild oats—whatever in the world that means.

I love Nadia. She’s my closest friend, as well as my cousin, and she’s one of a very select few who knows what it’s like to live in this crazy family of ours. My roommate, Ivie, knows.

Because while my uncle is the boss of one of the most prominent crime families in the country, Rafe’s father is the boss of the biggest family on the west coast.

Which means that everything Rafe and I are to each other, everything we’ve done, and what we’re about to do tonight is a secret.

Because if our families found out, we’d be in big trouble.

I sigh in relief when my biology professor gives us the okay to leave. I gather my books and papers and rush out of the lab toward my car.

Ivie and I live in an apartment just on the edge of campus. My uncle is kind enough to pay for it. Lord knows, neither Ivie nor I could afford it.

My date with Rafe is in an hour. Which means, I have to take a shower and get ready to go fast because Rafe is never late.

It’s just one of the million reasons I love him so much.

“Hi, friend,” I announce as I rush past Ivie to my bedroom. “Can’t talk. Gotta hurry.”

“I’ll follow you,” she says and leans her shoulder against the door of my bedroom as I strip naked and make a beeline for the bathroom. “What lit a fire under your butt?”

“It’d better be with Rafe. He’d be pretty mad if it was with someone else.”

Ivie smirks as I start the shower and throw my hair up under a shower cap. She’s the only one who knows about Rafe and me. I had to tell her. She lives here, and I spend a lot of time with him.

“Tonight’s the night,” I inform her.

She flings the shower curtain back and stares at me with wide, blue eyes. “You’re going to do it?”

“Yep.” I smile and shave one armpit. “I’ve been on the pill for a month, so we’re covered there. I mean, we’ve literally done everything else. It’s borderline torture. I’m so ready. He does things to me that I didn’t even know were possible. The way I feel when he looks at me, let alone what happens to my skin, to my stomach when he touches me... I’m telling you, Ivie, it’s incredible.”

“I’m totally jealous.” She pulls the curtain shut again, but I can hear her organizing things on the countertop. “Also, you’re stupidly hot together. Like, you could be a celebrity couple, you’re so pretty. It’s like Brangelina.”

I lather up one leg but pull the curtain aside so I can grin at my best friend. “You’re so sweet. Thank you.”

“I think you should tell your parents.”

“No.” I get to work shaving and shake my head, even though she can’t see me. “No way. Uncle Igor would throw a fit, and I’d be in big trouble. I don’t even want to think about what the punishment for this would be. And for Rafe, it would be worse. So, no. It’s our secret.”

“But what happens after this, Annika? I know it’s exciting now, but you won’t be in college forever. What then? Are you going to get married in secret and have secret babies?”

Tears want to threaten, but I swallow them and rinse my legs.

“Stop it. Tonight is going to be special, and I’m not going to think about the future and ruin it. It’ll all work out. All I can do is live day to day.”

I wrap the towel around me and immediately reach for my makeup bag.

“I don’t agree with you, but I hope tonight is everything you want it to be.” She pats me on the shoulder and leaves the bathroom, and I stare at my reflection.

“Everything’s going to be just fine.”

“You’ve asked me that about six times.” I smile at Rafe as he tucks a loose strand of hair behind my ear. The truth is, I’m sore, and it hurt way more than I thought it would, and was over pretty fast, too. But I’ve also never felt more connected to a person in my life as I do right now, lying in Rafe’s giant bed.

“Are you okay?” I ask him and drag my fingertip down his nose. Rafe is a handsome man. He’s tall and broad, and I know he works out almost every day. The efforts show. He has muscles on top of muscles and tanned skin. I could lick every inch of him.