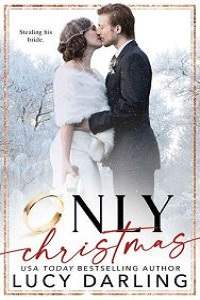 I hate this time of year. It grows worse with each year that passes. My mother’s persistence wears on me. The older I get the more she’s all over me about getting married and settling down. I don’t understand it. The woman is on her fifth marriage.

She’s in love with being in love. I’m not sure I’ll ever get it. She always insists that each new man she finds is the one. That he’s her forever. But it never seems to work out that way and then the process begins all over again.

It’s jaded me to the idea of love. How can one have so many forevers? Not that I’d ever say that to her. She means well. Sometimes I think my father’s death left a hole in her heart. One that she is always trying to fill. It almost makes me sad, to be honest.

That is another reason why I’ve kind of vowed to never fall in love. Why would I want to when it could so easily be ripped away from me? It’s better to stay single. How could you ever get over having your forever taken away? And how could that love so easily be replaceable? I’m not sure I believe in any of this true love bullshit. None of it makes any sense to me. It’s not logical.

“Can I take this for you, sir?” the flight attendant asks, motioning toward my empty drink. “We’re about to land.” She licks her lips, watching me. When I got on the flight she’d made it clear she was willing to give me any service I’d like.

I’m sure most would take her up on her offer. I’m not interested. She’s a beautiful woman in the classic sense of the word. I find her rather boring and predictable in a way I don’t care for.

“Take it and go.” I wave her off. She purses her shiny red lips before she snatches the glass off the table. I’ve learned that I need to make myself perfectly clear in these situations so that there aren’t any misunderstandings. Some might call me an asshole, but I’m fine with that.

Marco fights a laugh from his seat across from me. I shoot him a glare, annoyed that my normal staff isn’t here, but I suppose they’re entitled to take days off for the holidays. Even if it is a major inconvenience for me.

I loathe change, and that even means the staff that I keep close to me. It’s part of why I'm not firing Marco for enjoying my discomfort at the stewardess's advances. He’s all I have at the moment, so I have to put up with some shit from him.

“It’s ridiculous.” I close my laptop and lean back in my seat, checking the time. I may give Marco a hard time, but he is good at his job, often predicting things I’ll need before I even realize I need them. This time his prediction was wrong, though.

“Let’s see if you're still saying that after this week.”

“Do I pay you for each word you speak?” He’s been extra chatty today.

“This is supposed to be a vacation.”

“Vacation? I’m going to one of my own hotels, and I’d rather be working.”

Instead of getting things accomplished, I’ll be spending a handful of days with my mother and her new husband's family. At least this one has his own money. I have no fucking clue what she was thinking with that last schmuck. I don’t think that man worked a day in his damn life.

“It will make your mom happy.”

“I know.” I let out a long sigh, knowing that it will indeed please my mom that I’m making an effort. I don’t know how she talks me into this shit, but she always does.

“She worries about you.”

“I don’t understand why.”

When it comes to my career, I’m more than killing it. I’d taken my father’s luxury resorts and expanded. We went global a few years back. We are now one of the top-ranking hotel and resort chains in the world. Every goal I’d set for myself I’ve more than achieved.

So many people on the board had pushed back on my ideas. They only saw me as a kid that just graduated college and decided I didn’t know enough to take over. I proved them all wrong. I worked tirelessly to make sure of it. I also made them a shit ton of money in the process.

“I have a life. My fiancé will be meeting me out here tomorrow.”

“Yep. I want to get married. You think I’m not going to spend Christmas with him?” He shoots me a look like I’ve lost my mind.

“Hadn’t really thought about it.” I shrug. I suppose that makes sense. They’ve been together for a few years. They got engaged a month ago.