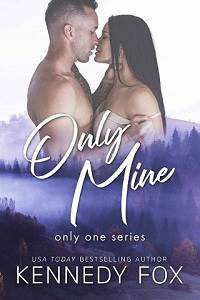 I’m not your girl next door.
They call me loud, blunt, and too gorgeous for my own good.
A woman who can’t be tamed.

Until Archer.
The problem? He’s my brother’s best friend. My new roommate. And off-limits.
Until we spend a wild night between the sheets.

But secretly dating isn’t easy.
Our pasts collide with the present.
And the only man who can save me is the one I shouldn’t want.

Only Mine is a roommates to lovers, small town romance and is a repackaged boxed set from the Archer & Everleigh duet in the Lawton Ridge duet series. There's no cliffhanger and ends in an HEA.

As I wait in my car for Annie, I know something’s wrong.

My sister was supposed to meet me for lunch twenty minutes ago, and she’s not answering my calls. She’s six months pregnant and sometimes gets caught up with morning sickness. However, she usually texts me if that’s slowing her down. I would’ve preferred to pick her up, but her drug dealer boyfriend doesn’t like me coming around. He knows I won’t take his bullshit, so we have to sneak behind Chad’s back.

Probably for the best because while I’ve had this talk with her dozens of times, I’ll give her my entire savings today if she’ll finally leave his ass. Selling drugs is bad enough, but he also treats my sister like a punching bag. I’ve seen bruises on her and nearly lost my shit. Right now, I have enough cash to move her away from here as long as she’s willing.

After another ten minutes of waiting and five calls sent to voicemail, I hightail it out of the parking lot and drive to her house. The neighborhood’s trashed on a good day, but it’s all she can afford. We didn’t grow up with much, and both got into some trouble trying to survive. However, after high school, Annie got her CNA license and turned her life around. I’ll always love and be proud of her, but we fight because of her god-awful taste in men. Perhaps she gets it from our mother. Lord knows Mom couldn’t have a stable relationship to save her life. Chad always has an excuse for why he can’t pay half the bills, so Annie constantly works overtime at the nursing home to cover them.

I park in front of her place and notice the screen door has been ripped off the hinges. My heart pounds as I race up the porch stairs and see tables and chairs flipped over.

“Annie!” I call out, and when I go into the kitchen, I freeze at the blood pooled around Chad’s skull. “Annie…”

“Archer, stay there,” she orders with panic in her tone.

“Are you hurt?” I ask, eyeing the handgun in her grip. “Give me that.”

“I-I didn’t mean to shoot him…” Her voice trembles as her hand shakes.

“Annie, gimme the gun,” I repeat as calmly as I can.

“He came home and started breaking everything. I’m not sure what set him off this time. It was like he was…”

“High off his ass,” I finish for her.

“He grabbed my arm and squeezed me so hard. I cried and begged him to let me go,” she explains between sobs. “That only pissed him off more, and he threw me to the ground, then started kicking and hitting me. When I saw the gun in his hand, I thought he was going to kill me.”

When she finally blinks up at me, I notice her nose and face are covered in blood.

“I managed to kick him in the groin, and when he fell to the ground, I grabbed it from him.”

“He stood and laughed, but it was a terrifying sound. Said I was gonna pay for that. Threatened to kill the baby. Called me a bunch of names, and when he came for me, I panicked and pulled the trigger.”

Tears fall down her red-stained cheeks.

“I shot him in the leg first. He barely flinched, so then I aimed for his head.”

“Good. You did the right thing,” I assure her. “He would’ve taken your life, Annie. You realize that, right?”

She stares off and nods, the shock of reality hitting her.

“Annie, it’s okay.” I hold out my palm, pleading for her to comply.

She slowly gives it to me, and I immediately wipe off her prints with a dish towel.

“What? Archer, no.” She scrambles for the gun, but I lift it out of her reach. “You’ll go to prison. It was self-defense. He was…”

“Kicking your ass,” I grind out. “He kicked you in the stomach again?”

She nods, then turns around and lifts her shirt where his shoe prints are embedded into her pale skin.

“The ribs,” I spit out. At least he had some decency not to kick the baby.

“And if we can’t prove self-defense, you’ll be giving birth in a jail cell. Even if you don’t get prison time, the strain of going to court could put the baby in distress. Not risking that.” I turn her around to face me. “I’ll tell them I walked in on him hitting you, grabbed the gun, then shot him twice. With your injuries, it’s believable. You need to go to the ER and get an ultrasound.”