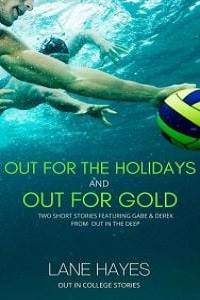 “I will live in the Past, the Present, and the Future. The Spirits of all Three shall strive within me.”― Charles Dickens, A Christmas Carol

The sound of clinking glass and rattling silverware might be heard under the cacophony of conversation and laughter. It might bounce off the bistro’s white-paneled walls, wood farm-style tables, and blue rattan café chairs. Soft jazz would be piped through the speakers. Or maybe holiday music. Fairy lights would twinkle merrily in the potted trees near the wide windows, lending a festive ambience to the inviting space that encouraged customers to settle in, order a ton of food and a bottle of wine or two, and just…enjoy.

Well, that was the dream, anyway.

The reality was an empty shell of a room with chipped tile flooring, cobwebs in every corner, and if I wasn’t mistaken, mouse droppings on the front door. Gabe followed my wandering gaze and made a “yuck” face as he snaked his arm around my waist.

“Look beyond the mouse shit, babe,” he advised. “This place is…charming. Kind of.”

Evan snorted. “I warned you it was a fixer-upper, Der. We, in the business, refer to this type of property as—”

“A money pit?” I intercepted.

Max chuckled. “I think he was going to say ‘opportunity.’ Am I right, boss?”

Evan held his hand out for a high five. “This guy’s going places. That’s exactly right. You know what they say. Location, location, location. It’s the damn truth. And you’re not going to find a better location for your bistro. You need to be on 2nd Street. The next-best option is a block away. But that block could cost you customers. Visibility is important. I know this place is nothing to look at right now, but it’s got potential.”

I stepped toward the huge picture window. There was plenty of space under the ripped awning for outdoor seating in warm weather. Evan was right about the location. The foot traffic alone in this section of town was worth the high rent. I just didn’t know if Gabe and I could afford it.

I glanced up on cue at the painted tin tiles, then studied my boyfriend and our companions.

They were a damn fine-looking trio. Tall, dark, handsome, and athletic too. My best friend, Evan, was a former football player turned real estate agent. He’d lost a bit of his bulk since graduation a couple of years ago, but he was still muscular. Max, his coworker, was a former baseball player at Evan’s alma mater. When Max started working for Evan’s firm four months ago, Evan volunteered to train him. Max was gregarious like Evan…a trait that would no doubt serve him well in sales. He was also extremely hot.

But not as hot as Gabe. My boyfriend was six three with dark hair, hazel eyes, broad shoulders, a tapered waist, and the most beautiful smile I’d ever seen. Gabe was an Olympic-caliber water polo player. No joke. He was slated to go to Tokyo next summer to play with the US water polo team in the Olympics. In the meantime, he coached two club teams and assisted our old coach at Long Beach State. And as soon as we agreed on a location, he’d be the proud co-owner of Bonne Terre.

Okay, so opening a French-bistro-slash-coffee-shop was my dream, not Gabe’s—however, he’d been my number one supporter for over three years. He was my partner in life and in business. Kind of funny considering how much I hated him when we played water polo in college. Life had definitely changed over the past few years.

I wondered whether I would have gone to culinary school if it hadn’t been for Gabe’s encouragement. He had passionate views about doing whatever made you happy. And though a job at my dad’s company would have paid a great salary right from the start, I would have been miserable. Of course, my parents were sure I’d be miserable once I realized I’d signed on to be a glorified waiter for the rest of my life.

Not true. But even if it was, I loved the art, craft, and science of food. And I wanted to share what I’d learned with others. If that meant cooking and serving every meal myself, I’d do it. Well, okay…I couldn’t do it alone. But with Gabe by my side, I felt like anything was possible.

But damn, this place was a mess. Maybe I was in over my head.

“Dude. Stop tormenting yourself. This is doable,” Evan chided, playfully nudging my elbow.

I sighed. “Yeah, but it’s a lot of work. It’ll take at least two months to get this place in order.”

“So what? It’s October now. You’ll be open for the holidays. How cool is that? I know a few guys from my old football team who’d pitch in for beer. And you know Mitch would be happy to help with marketing,” Evan said. “Chelsea will want to help with designer stuff.”