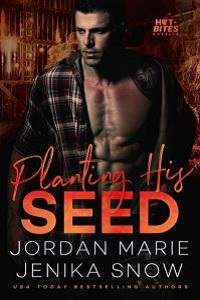 I don’t turn around to look at her. I’m standing at the large picture window in my study, looking out across the land that has been in my family for generations. Land that has seeped into my bones and oozes out when I bleed. Land that is a part of me. Land I would die without .

Living in Blayton, Wyoming might not be for everyone, but it’s all I’ve ever known—and all I’ve ever wanted. Except for one thing .

I’ve wanted Jenny for as long as I can remember. She’s been my biggest blessing and my biggest curse. Her father, Luke, was older than me, but he was my best friend and someone I trusted and leaned on. Being a farmer in the heart of ranch country isn’t fucking easy. Being a farmer anywhere these days is hell. Luke was a sounding board when I needed it. I depended on him every damn day and I think he did the same with me .

When cancer took him out six years ago it felt like I lost a piece of myself. I had already lost both of my parents and except for Luke and this land I didn’t really have anyone. I’d do anything for Luke, and when he asked me to take care of his daughter, I agreed—against my better judgment. What the hell does a thirty-year-old hardened bachelor know about sixteen-year-old girls—other than they’re trouble ?

And Jenny is definitely that .

She was angry at the world after losing her father. She had no one left either and if anyone knew that feeling, it was me. We settled into a routine. I was never her father, would never try to be. I became her guardian and her friend and that was fine. My housekeeper Mavis was more of a parental role for Jenny .

For the first year, it worked out great. I began to look forward to spending time in the evenings listening to Jenny talk about school and her plans for the future. Hell, I didn’t even mind listening to hours and hours of talk about her friends. Slowly that changed. At seventeen, Jenny began dating. Fuck, I might have been thirty-one at the time, but I still remembered what seventeen-year-old boys did and what stayed on their minds. I had to watch Jenny like a hawk. I owed it to Luke to make sure no one took advantage of his little girl. That’s all it was .

One night, on the eve of her eighteenth birthday, we were on the front porch watching the stars, reminiscing about her father and the past and that’s when it happened .

It wasn’t planned or premeditated. It happened from bonding over common grief. I had no business touching her. I’m fourteen years older than her, she was placed in my care by her father, and I am supposed to look out for her. Hell, I’m supposed to protect her from perverts trying to get in her pants—not become one of them .

I’ve fought it. I’ve fought it for four years. I found excuses to stay away from her until I could get my libido under control. Then, I made sure she went all the way to Florida for college. That almost killed me, because with just one touch of her lips I became a marked man. There was only one woman I wanted, and one woman I had to have from that moment on .

Over the years I’ve become an expert at keeping my body’s reactions hidden from Jenny. Every time she came home for the holidays or during breaks, I was both in heaven and in hell. Having her close to me, hugging her and just spending time with her was an exercise…in torture. Jenny, for her part, was and is clueless. She has no idea how much I want her or how much I need her. She has no idea about all of the dirty little things I want to do to her body .

I pull my gaze from the window and the landscape outside, to the well-worn photo in my hand. It’s a picture of Jenny from last Christmas. Her long brown hair is pulled back on the top of her head in a ponytail, and stops at her lower back. Her sparkling green eyes shine like they have the answers to life’s greatest mysteries. She’s tall and slim. She’s too slim if I’m being honest .

Some damn boyfriend she had convinced her she was too heavy and she ended up going to the gym religiously. That little asshole didn’t last long. I had to work to get rid of him. Jenny deserved better than him. Hell, she deserves better than me. But tonight she’s coming home. She’s done with school, having earned her bachelor’s in education .