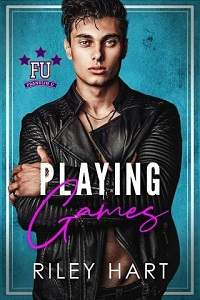 My gaze darted toward the door of Shenanigans, the local bar close to the Franklin University campus. I’d known the voice without looking, so I wasn’t sure why I had. What kind of person had to announce their arrival so loudly and obnoxiously, like they were a gift to the fucking world?

Nearly everyone’s attention snagged on him. I hated that mine did too. Unlike the others, I didn’t like the guy, didn’t pray to the spoiled little lacrosse god because he was gorgeous, cocky, and had a rich daddy. But I had to admit, he was hot, which just pissed me off. I hated sports, hated jocks and the way people worshipped them. Why did I also have to find them so damned sexy?

This wasn’t the first time, and I feared it wouldn’t be the last.

It was annoying as shit.

“Hey, man. You ready for the season?” a guy asked Ty as he made his way toward the counter. It was January, and they hadn’t even played their first game yet. The only reason I knew was because it would be all over campus, and the team often landed at Shenanigans as their place to celebrate. Being within walking distance of campus made it convenient.

When it came to sports, there were two at FU that everyone lost their collective shit over—lacrosse and football. The former, mostly because of Tyson Langley, and the latter, due to Peyton Miller. Apparently, Peyton’s two dads had both played in the NFL or something. I didn’t pay enough attention to know. I had too much going on to care.

“Bro, can I get a beer?” asked a guy wearing a Franklin University tank.

I checked his wristband. Shenanigans was an eighteen-and-older bar—Oscar, the owner, had wanted to make sure he could capitalize on all the FU students—though only those of age could drink. For alcohol you had to have a wristband, which they gave you at the door—different colors for each night. Tonight was light blue with little suns on it. Oscar liked to shake things up. I thought it was dumb, but what did I know?

I grabbed him a bottle, handed it over, and took his payment, wishing I was anywhere but there. I had a shit ton of homework to do. I had to have B’s or better to keep my scholarships and not get tossed out of school on my ass.

I made a few drinks as Ty and his friends laughed and talked shit, being loud as hell, like they always were.

I’d just given margaritas to a few girls when I heard, “Braxton Walker…do you ever smile?”

Fuck my life. I looked at him and crossed my arms. “Tyson Langley, do you ever shut up?” I didn’t know why he insisted on trying to talk to me. We were both computer science majors and had a lot of classes together, but we weren’t friends. We never would be, and as far as I could tell, he was on the same page. He just liked to get under my skin. And like everything else in his life, he got his way with that too.

“Now is that any way to talk to your favorite customer?”

“You’re not my favorite shit,” I replied. He bit back a laugh, and I rolled my eyes. Of course he would take it that way.

“Did you do your Ethics in Computing homework?”

My brows pulled together. What the fuck was he playing at? “No.” I hadn’t done it, but I would.

“Oh, I got it finished early.” He puffed his chest out smugly.

If I had more time, I’d be done too. But between school, my TA hours for my scholarships, and my job, I was busy. I’d looked into entry-level jobs in my field, but companies paid shit until you had a degree. I made more bartending because of the tips. Next year, I’d have to do a co-op, but I’d cross that bridge when I came to it.

“Unlike you,” I told Ty, “some of us have to actually work on top of going to school. They’re called jobs, and it’s what I’m doing right now.”

Was it me, or did he flinch? Ty trained his blue eyes on me again. “Want me to give you the answers?”

“Fuck no. I don’t want to fail.” Stop talking to him. Walk away. I didn’t know how he had this power over me. With anyone else I would have told them to suck my dick and left, but with Ty, I kept it going, wanting to see how far we would take it, always needing the last word.

The hairs on the back of my neck stood on end. “Guys like me? Do explain.”