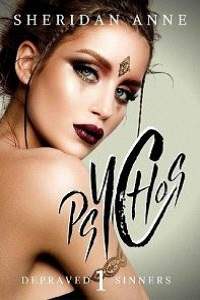 Fuck homelessness and fuck turd-tastic landlords. They can shove a stick of dynamite up their bitch asses and play with a box of fireworks while hoping to God they don’t blow themselves up. We shall call it dynamite roulette and it will be the game of the century.

Letting out a sigh, I stumble to the fridge and I glare at the stupid piece of paper pinned beneath a magnet. ‘Notice to Vacate’ is printed in bold red lettering across the top and I can’t help but feel as though it was printed this way just to mock me. “Fuck you too,” I sneer, ripping the freezer door open and scowling at the contents.

My fridge is supposed to be my happy place, but the barren wire shelves are just a reminder of how awful the last six months have been. A single tub of half-eaten ice cream stares back at me, and with the week I’ve had, I’m shocked there’s any left at all.

It’s been one of those extra shitty days, and having my landlord shove the eviction notice under my door was the cherry on top of my shit sundae. I am royally fucked, and I have absolutely no idea what I’m going to do once these thirty days are up.

In all seriousness, I should probably lay off my landlord. It’s not his fault that my rent hasn’t been paid. I knew the eviction was coming, and to be honest, my landlord gave me longer than expected. Though he doesn’t exactly deserve an award for his patience. The man’s been trying to get between my legs since the day I moved in here. He doesn’t give a shit about me being homeless, the asshole is just trying to see how far my desperation will get him. He should know by now that no amount of money, not even a roof over my head, is going to have me bending over for him.

My fingers curl around the tub of Oreo ice cream and I let out a heavy sigh before closing the freezer door with a little too much enthusiasm. It’s just after four in the morning and I’m freaking exhausted. I’ve spent an entire shift at the club dodging assholes and straining to hear customer’s orders over thumping music.

My head aches. The club has recently hired a new DJ who’s a little more techno than he has the right to be, and every shift that I share with him has been nothing short of a nightmare. Not to mention, having to deal with my asshole boss who thinks it’s acceptable to treat his female employees like a piece of meat is always such a special treat. I need to get out of there, but for now, it’s my only income, and I can’t quit until I’ve got something else lined up. Though, no high school GED and no other qualifications means that it’s either bartending, stripping, or selling myself to pricks on the street. I don’t have great options.

Digging around in the kitchen sink, I search for the cleanest spoon I can find before dragging my feet down the short hallway to my bedroom. Kicking my shoes off at the door, I push my black ripped jeans over my hips and thighs until I’m awkwardly stepping out of them. My dirty black tank sails over my head in one quick motion, and I toss it into my ever-growing laundry pile near the closet. Setting my ice cream on my bedside table, I find a face wipe and begin scrubbing off the fake version of myself, more than ready to call it quits on this day from hell.

My mattress sags beneath my weight as I plop down and cross my legs, tucking my mismatched bra and panties beneath the blankets. Pushing the power button on the TV remote, an old rerun of Game of Thrones appears on the small screen. With a sigh, I peel the lid from my ice cream and dig the spoon deep into the yummy goodness.

There’s nothing quite like unwinding with a tub of ice cream after a shitty night … hell, a shitty six months.

The Oreo ice cream melts against my tongue as I twist the spoon in my mouth. I swallow hard watching Daenerys take control of her big-ass beast of a man, and damn, the scene has me reaching toward my bedside drawer. I take my hat off to her. She’s a fucking boss ass bitch living the freaking dream. Who wouldn’t want to fuck Khal Drogo? Just the thought has goosebumps spreading over my skin.

Shoving the ice cream back onto my bedside table, my hand falls right to the bottom drawer. I dump its contents on the floor beside my bed and start digging through the endless options. Majority of these little guys don’t even work anymore. Their batteries are either fucked or I’ve lost their chargers, but there’s one special guy who will weather all storms and always come through for me. I call him Tarzan, but not the animated version, the Alexander Skarsgård version. We’ve had some really amazing times together while watching that beast of a man swinging through the jungle.