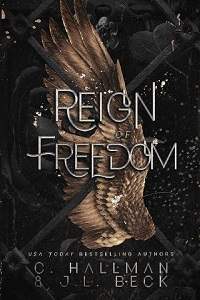 Sitting in my brother’s black SUV as it pulls up to the side of the road, the brewing anger in my gut reaches a new high. Looking out at the building in front of us, my whole body is tense, ready to kick down the door and drag Delilah out of this nasty place by her hair.

“This is it,” the driver tells me. “I can wait here for you or come back later.”

Knowing Nic, he probably has a backup team posted a few blocks away. He offered to come with me, but I figured a quick in and out would be easier. At least, if everything goes as planned.

Stepping out onto the sidewalk, the only light source is the old neon sign on the front of the brick building. KISS is the name, but the I is burned out, making the sign read KSS instead. There are no working streetlights either, which is most likely by design, considering it’s a brothel.

Letting my growing irritation get the best of me, I slam the car door shut harder than necessary before heading to the entrance. Lifting my arm, I bang against the heavy wood with my fist until the door finally opens.

The bouncer on the other side looks like an ogre dressed in a suit too small for him. He’s a good bit taller than me, which is impressive since I’m six-two. The suit stretches off his muscular arm like it’s about to burst, and I can’t help but smirk. They put him here to fight people off. What a joke. I would take this guy out in less than twenty seconds.

“Yes, I’m here to talk to your boss. I want to buy one of your girls.”

“You can rent our girls. We don’t sell them.”

“How about you keep being a guard dog while the adults talk business?”

His nostrils flare, and his hands turn to melon-sized fists, but he doesn’t make a move to attack me. Good boy.

After a moment, he pulls his phone from his pocket and punches in a number with his meaty fingers. “Boss, someone is here to see you about buying one of the girls.” I can hear someone talking on the other side, but it’s not clear enough to make out the words. “I see. I’ll send him up.” He ends the call and shoves his phone back into his pocket.

“Boss has been expecting you. But before you can go in, I need you to leave any weapons with me.” He reaches for a metal detector hanging next to the door and starts running it over my chest, then down my side to where my gun is sitting in my holster.

The metal detector goes off, and ogre guy holds out his hand like he is waiting for me to give him some candy. Rolling my eyes, I reach for my gun and hand it to him. We go through the same spiel with the gun tucked in my waistband and again with the knife in my boot.

Once I’m completely unarmed, he steps to the side and points down the hallway. “Go to the end of this hall, up the stairs. First door on the right.”

Not wanting to waste any time, I shove past him and follow his direction. As I move through the house. I notice armed guards in every hallway, cameras in every corner, and most of the doors are made of steel instead of wood. Fuck. This might be harder than I anticipated.

I don’t bother knocking when I get to the door I was sent to. I pull the door open and step inside the lavish office that doesn’t fit the rest of the building. The large space is sleek and stylish, while the rest of the place looks exactly like you’d imagine, run down and sleazy.

“Lucas, what a surprise to see you here.” Nathaniel grins, sarcasm dripping from his voice.

“Cut the crap,” I warn, stepping into his office and kicking the door shut behind me. “Where is she?”

“Please, come in, make yourself comfortable.”

“Where. Is. She?” I grind my teeth together so hard that my ears hurt.

“Delilah is in her room, getting ready for her next customer.”

“I’m taking her back to Corium. She needs to face her punishment for trying to kill another student.”

“That’s odd. She told me it was your daughter who let her go. Is Aspen being punished as well?”

“She is being dealt with accordingly, inside school walls. It’s Delilah who needs to return.”

“Actually, she does not. You let her go, and she is working here now. I must say, I was surprised to find out about your attachment to her. According to rumors, she was staying in your apartment at Corium. Did you not have enough fun with her?”