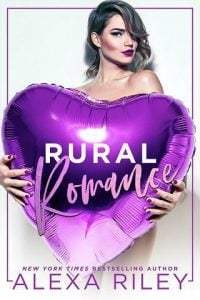 Lux is ready to leave Pink Springs and spread her wings, but when she winds up in the big city squeezed into a bunny costume, things are definitely not going to plan. One little hop into the arms of a stranger changes everything, and suddenly this small-town girl is feeling right at home.

Bastian’s path to success doesn’t include a detour, especially one that falls into his lap. What’s he to do when a cute little bunny makes a home in his heart? Simple: love her forever.

Warning: Welcome to Book 1 in the Pink Springs Series! It’s just as adorable as it sounds.

I glance at the clock again knowing I’m out of time. I should have accounted for this, but I’m always late. It’s a terrible habit, but I could have worse ones. It doesn't matter how hard I try, time always gets away from me and then it’s a mad dash. It’s really going to bite me in the butt today if my brother makes it back home before I’m long gone.

I tape up another box quickly then carry it outside and put it in the back of my little blue Beetle. I got it for my eighteenth birthday, but my brothers never would have given me this car if they knew what I was up to. If it was up to them I’d stay right here forever and become a spinster. I do a kickass cross stitch, but that's not all I want from life.

My phone starts buzzing like crazy in my pocket, and when I pull it out I drop it on the concrete driveway. I let out a sigh of relief when I see the screen is fine. That is until I see why my phone is going off in the first place.

There are twenty texts one after another saying CODE RED! I’VE BEEN MADE! Of course she was made! I never should have believed Juno could keep tabs on my brother. He’s the town sheriff and she’s running around with pink hair this week. She’s unmissable.

I hear him before I see him as his SUV comes down the long gravel driveway. I run back into the house and grab a few more boxes and try to get them into the car before he gets here. Without realizing it, I misjudge the last step and hit the ground. Both boxes go flying. One bursts open, and clothes go tumbling out. Of course it’s the box with my underwear.

Cooper parks his car, making sure it blocks me in. I fold my arms over my chest, ready for a throw-down as he gets out of the SUV. He tosses his sunglasses back in before slamming the door.

“You know that’s the town’s property. You should take better care of it,” I say and then smirk at him.

This town would let him set his sheriff’s vehicle on fire in the middle of a parade and no one would care. They’d probably cheer him on and declare that day a holiday. As always when I’m pushing back against him, he ignores me.

“What the hell do you think you’re doing?” He walks around my vehicle in full cop mode. He looks through all of the windows and my trunk. My brother can be intimidating to most since he’s well over six foot tall and built like one of those football players they’re always yelling at on TV.

“I put all my drugs in your room.” He gives me a hard glare, not thinking I’m funny. Juno would laugh. Cooper is as straight-laced as they come. He was a SEAL before coming back home after we lost Dad. I was sixteen at the time. Instead of having me go stay with my aunt, he moved back into our childhood home and quickly settled into being the sheriff here.

“I’m not playing games with you, Lux.”

I roll my eyes at him. “I’m twenty. I can do as I please. Now be a good big brother and help me with the last three boxes I have.” I motion toward the front door.

“And where do you think you’re taking these boxes?”

“To the city. I got myself a place.” I try to say it with confidence.

“The city?” His jaw hardens.

“Yes, I need space.” I throw my arms open. “As much as I love Pink Springs, it’s time for something else.”

“What’s wrong with it here?” He actually looks insulted.

“Hey, you did the same thing when you went into the Navy,” I point out.

It was hard when he left. I was only about ten at the time. My other brothers took it even harder because they were so close. Luckily the next year Juno moved to town, giving me someone to hang on to. I love my brothers more than anything, but I’m going to miss her the most. She knows I have to do this, even if it’s going to be hard being apart.