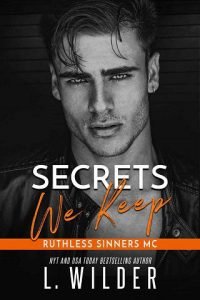 I was just sixteen years old when I saw them for the first time. I was in the doorway of my garage, helping my ol’ man patch a flat tire on my Kawasaki Vulcan. It was my first motorcycle, and while it was no Harley, I was proud to call it mine. Hell, I’d just about worn the damn wheels off it, which was why my father was outside giving me a hand.

He was busy griping about missing the big game when I heard the faint hum of motorcycles coming our way. Like a moth drawn to a flame, I stepped out of the garage and down the driveway in hopes of getting a better look. The low rumble quickly morphed into a thunderous roar as the bikes continued in my direction. I was beside myself. Every fiber of my being was vibrating with anticipation; in my gut, I knew something big was about to happen. I just had no idea what it was—only that my life was about to take on a new direction.

I ventured a little further down the driveway, and that’s when I finally saw them. There were at least twenty bikers, each wearing black leather jackets with Ruthless Sinners embroidered on the back. They rode side by side as they barreled down the road, power and confidence radiating off of them like nothing I’d ever seen. I wasn’t some sheltered kid who’d never seen bikers before, but I’d never seen so many so close. As I stood there in my driveway, I could actually feel the vibration of their engines rattling through my chest and was completely enthralled by the moment. I couldn’t move. I could only stand there with my eyes wide and my mouth gaping open. And then it happened. One of the bikers looked in my direction and gave me a quick nod, and when several others followed suit, my day was made. I was just a dumb kid who didn’t know much of anything, but one thing I was certain of: I wanted to be a Ruthless Sinner.

Over the next few years, I graduated high school and even took a couple of classes at a local community college, but I never forgot about that moment in my driveway. In fact, I thought about it all the time. I was beginning to worry my idea of joining the Ruthless Sinners was just some pipe dream until the day I’d bombed yet another calculus test.

I was in dire need of a drink, so I stopped off at Crockett’s, one of my usual hangouts, to grab a beer. Gladys, the bartender, was about eighty years old and southern as the day was long. She was never one to card, so I had no worries as I went up to the counter and sat down. Gladys hobbled over to me with a crooked-toothed smile and asked, “What’ll it be, son?”

“Just a Bud Light for now.”

“You got it.” She shuffled over to the cooler and grabbed a cold bottle, then brought it over to me. “There you go, Hun.”

I opened the bottle and was just about to take a drink when I heard the front door open behind me. Seconds later, a man asked, “Did you card him?”

“Don’t mean a damn thing.” The guy came up to the counter, and my chest tightened when I saw he was wearing a Ruthless Sinners’ cut. “They’re gonna shut you down over shit like this.”

“Well then, I guess they’ll just have to shut me down,” Gladys picked up a rag and started wiping down the counter as she grumbled, “’cause ain’t nobody gonna tell me who I can and can’t sell to.”

“Like you’re one to be talking about the damn law.’”

“You’re the most stubborn grandmother on the fucking planet, you know that?”

"Maybe, but I’m no more stubborn than you.”

“How am I being stubborn? I’m just trying to look out for you.” Ignoring her response, the guy glanced over at me and shook his head with a sigh. He didn’t seem to be much older than me, maybe a year or two at best, so I was surprised when he asked, “What are you ... seventeen? Eighteen?”

“No shit? Damn. You look younger.”

I shrugged. “Just have one of those faces, I guess.”

“Just so you know”—Gladys leaned over the counter—“he’s a college student. Taking him some classes down there at Nashville State.”

“Hmm.” The guy’s eyes narrowed as he asked, “That right?”

“Yeah.” I didn’t want him thinking I was some stuck-up college prick, so I quickly continued, “But I don’t know how much longer I’m gonna stick with it.”

I wanted to tell him I’d always wanted to be a Sinner. Hell, it was sitting right there on the tip of my tongue, but I couldn’t make myself say the fucking words. “Just don’t think it’s for me.”