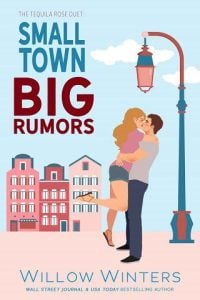 He tasted like tequila and the fake name I gave him was Rose.

Four years ago, I decided to get over one man by getting under another. It was supposed to be a single night and nothing more.

I found my handsome stranger with a shot glass at the end of the bar, along with a charming but devilish smile. The desire that filled his eyes the second they landed on me ignited a spark inside me, instant and hot. He was perfect and everything I didn’t know I needed. That one night may have ended too soon, but I left with much more than a memory.

Four years later, and with a three-year-old in tow, I’m back home in the quiet little town I grew up in. As the man I still dream about stares at me from across the street, the flash of recognition and the heat in his gaze are unmistakable.

The chemistry between us is still there, even after all these years.

I just hope the secrets and regrets don’t destroy our second chance before it’s even begun.

College campus on the East Coast

I lie to myself. That’s what a person does when they’re hurt. They say they’re not hurt at all.

“I’m fine … and Robert can go fuck himself.” The additional statement is an extra special truth to make the lie okay. I’m dead set on the words coming out of my mouth even though I’m alone in my apartment with no one here to listen to my declaration. The ball of anxiousness and betrayal in my throat lodges itself deep at the mere mention of his name. Funny enough, every gulp of Sweet Red I take seems to ease that cruel combo down and shrink it so I can swallow the bitter breakup.

Wine and cupcakes. That’s what I’ve been working with tonight. I could eat a dozen cupcakes right now, but I only had two left over … and even the remnants of the frosting on their containers is gone. So now I’m down to just wine.

Alcohol, sweets and trash TV is supposed to be how a girl deals with a breakup, right?

I’m trying my darnedest to take all this in stride, but it freaking hurts. I’ve never been with anyone else. I’ve never loved anyone else. I don’t even know how to handle a “breakup.” If I can even call it that. He dumped me. Plain and simple. My high school sweetheart, the man I’ve been with for five years dumped me, and he did it over a freaking phone call.

Tears prick the back of my eyes remembering how we just slept together when I was home last week and how adamantly I believed the words that came out of his mouth when he told me he loved me. I feel so stupid for believing him. I’m a fool for having no idea that this was going to happen.

I need more cupcakes. Shoot, maybe I should buy a full-blown cake at this point.

I pick up the half-empty bottle of red wine and pour another helping into the pale pink mug. You can achieve any goal you can dream is printed on the other side of it in a silver, feminine script. My goal right now: get wasted. And yes, I can achieve it. One point for me.

I don’t own shot glasses, but a bottle of citrus vodka is next. Not having wineglasses didn’t hinder the wine, so why should a lack of shot glasses hinder the vodka? Two weeks ago, when I turned twenty-one and partied in my hometown to celebrate the last year I’d have away at college, my best friend, Renee, poured all the shots that night and left me the bottle. She’s a bartender back at home. Moving away from one of South Carolina’s coastal Sea Islands was insane for me to do in Renee’s eyes. She’s never had any intention of leaving. Not for college, not for anything. She loves the boating life and sea breeze. As do my other friends.

Maybe that’s why Robert ended it. This long-distance relationship is too much all of a sudden. That doesn’t make sense, though. Maybe it was the long distance that kept him from severing the relationship. In less than a year, I’ll be back in our small town and it wouldn’t be a long-distance relationship anymore. Maybe he could deal with me far away, but in reality he didn’t want me anymore. I just don’t understand. Ugh, that hurts, that deep-seated insecurity that just burrowed into the pit of my stomach.

“Another gulp it is,” I joke bitterly and toss the mug back.

In fact, I’ll be better than fine.

I have everything going for me and now I’m free … and Robert can go fuck himself. I clink my empty mug with an imaginary one in front of me. It takes a half second for me to break into a grin and laugh at just how pathetic this is.