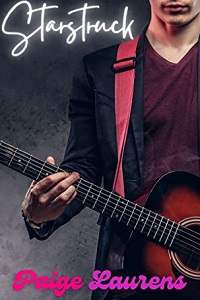 I religiously crossed off the days on my calendar waiting for today – the day I’ll come face to face with the Asher Montgomery, the first and only love of my life.

If you don’t know who this British-American star is, you’re not only living on another planet, but in an entirely different universe. Where have you been? Asher Montgomery is the lead singer of the boy band Let’s Go. This five-person group is made up of the hottest guys on the planet and Asher is everyone’s favorite. Let’s Go is about to release their fourth album, and even though the band is insanely busy preparing for their upcoming World Tour, Asher is currently starring in The Sound Of Music on Broadway, for one month only. My best friend, Jess, and I managed to snag tickets for today’s show, which means I’ll get to see him up close, like right in front of me close.

For the first time ever I won’t be one of sixty thousand in some huge stadium arena. Today will be different.

Today I have the chance for him to see me back.

I view it as a sign – that the show he’s starring in is The Sound Of Music. It could have been any Broadway show… but my name is Leisl (although everyone calls me Elle). I’ve grown up to The Sound Of Music, thanks to my parents, as it marks their momentous first date in which they watched the movie together… not to mention a lifelong curse of hearing, that’s a weird name, everywhere I go.

Thanks, Mom and Dad.

I swear when I have a kid one day I’m going to give him/her the most normal, boring name ever.

Jess and I skip school for about the fifth time this year (it’s okay, we’re seniors). We walk arm in arm as we rush up from the subway, taking the stairs two at a time with a palatable excitement. After all, we’ve been planning this day for months.

Pretty soon it’s easy to spot where a crowd is already waiting, anxiously hoping they’ll get to meet Asher before the show too.

It’s still early, so Jess and I grab the third spot in, right against the metal barrier, and with six hours to go, we wait.

It’s boring and cold, but I know it’ll be worth it.

Three hours later, the metal barricades have expanded. The police have arrived, and the crowd is approximately fifteen girls deep. It goes all the way back to the end of the sidewalk. It seems all of New York City has also skipped school today, just to get a glimpse of their favorite popstar. I’m positive tomorrow I’ll have a mark on my stomach from being pushed against the railing so many times, but again, I know it’ll be worth it.

By hour four I’m beginning to think Asher used some other entrance to get into the theater, and I can hear others are starting to think the same.

Another thirty minutes go by - still nothing.

I hope all this waiting is going to be worth it.

Just when I think all hope is lost, a large SUV pulls up to the curb and the air physically changes. My heart races and I can taste the excitement. I close my eyes and savor the feeling, like I’m about to enjoy the sweetest cupcake, decorated with the kind of frosting that’s laid on so perfectly, and sprinkled with those delicate multi-colored flakes – it’s the best kind of sugar rush, only this is in the form of Asher Montgomery.

Three massive security guards exit the vehicle, followed by Chad (another member of Let’s Go), and Asher’s current actress/model girlfriend (wearing the most disgusted look I’ve ever seen), and then… him.

My eyes go wide and my hands start to shake. The crowd erupts like a boom of thunder, and then the roars fade, only I know it’s only happening in my head. In reality everyone is just as loud, but in my mind everything stills. I zone in on the paparazzi’s cameras clicking away. I make out the spots from the flashing, like a real lightening storm in front of me. It’s the best kind of whirlwind, and then it hits me, this burst of fate.

This is my moment.

My moment for what exactly I’m unsure, but I feel alive. I feel like something important is about to happen.

I’m instantly brought back to the present, surrounded by chaos, trying to get a glimpse of Asher, but I can barely make out a single thing with all that’s going on. If I stand on my tiptoes I can just make out the shade of his dark dirty blonde hair sticking out in the midst of a sea of people, and I start to panic. I didn’t wait all this time for this.