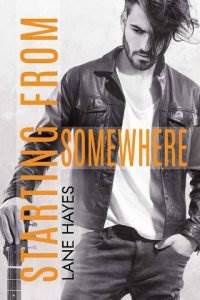 “Someday, somewhere—anywhere, unfailingly, you’ll find yourself, and that, and only that, can be the happiest or bitterest hour of your life.”—Pablo Neruda

The Zebra Den was the ultimate dive bar—complete with dark, dingy corners, sticky tabletops, torn leatherette barstools, and a pervading air of quiet desperation. In the plus column, the bartenders were friendly. They poured a strong drink, offered conversation if you were interested, left you alone when you weren’t, and they played decent music. Oh yeah, and it was right next door to the studio, which made it an ideal place to unwind after practice.

I took a sip of beer, then set my glass down, scanning the bar briefly before tipping my head toward my friends, who had apparently found something hysterical.

“What are you laughing at?” I asked, narrowing my gaze as I swiveled on my seat to face Declan and Tegan.

“You,” Justin chuckled. “Someone catch your eye?”

“Nope. But the night is young,” I singsonged, waggling my brows lasciviously.

“Not for us. We have to let Chester out.” Gray drew a few bills from his wallet and draped his arm over Justin’s shoulders. “Are you ready, babe?”

“Let me finish my beer first.” Justin leaned into his boyfriend’s side and flashed a sweet smile at him.

Justin and Gray were a striking couple with an eighteen-year age difference. Justin was the lead singer of our rival band, Zero, and Gray was a well-respected Grammy-winning songwriter. Okay, “rival” was the wrong word. The guys in Zero and Jealousy were actually pretty good friends these days. As the marquee bands for Scratch Records, we felt a joint responsibility to get our fledgling label up and running. We’d had a rocky start, but Charlie, our fabulous manager, steered us through the worst of it.

And yeah…it helped that Tegan and Declan had mended old fences. Jealousy’s lead singer, Declan, and Zero’s drummer, Tegan, were ridiculously in love. They weren’t gross about it, but I caught those dopey looks they shared every once in a while. It was kinda sweet. They were a hot couple: Dec was movie-star handsome with longish brown hair, blue eyes, and the toned physique of a swimmer. His boyfriend, on the other hand, looked like a badass tattooed wrestler. No lie. Tegan’s muscles had muscles.

I studied the Celtic design inked on Tegan’s forearm for a second, then glanced up and sighed when I caught the gooey-eyed lovefest happening. Tegan and Dec wore matching “I’m so gonna do you when we’re alone” expressions. Note to self: find new friends. Preferably single ones.

“Yeah, we should go too,” Dec said, tearing his gaze from Tegan’s to sip his beer.

“Really? One measly beer and you’re ready to roll?” I hoped my lopsided smile erased my whiny tone. I didn’t want to go home; it was too damn lonely. “The least you can do is help me find a drinking buddy.”

Justin gave me a pointed look as he stood. “I have an idea. Call Johnny.”

I raised my glass and sighed. “He wouldn’t pick up the phone.”

“Hey, I don’t know what happened between you two, but you were good friends. Buy him a bottle of Jack and fuckin’ fix it already,” Justin huffed.

“What? I’m just saying what everyone else is thinking. Do us all a favor and talk to him. Johnny’s a good guy. He’ll listen. Tell him you’re sorry and—”

“Hang on. What makes you think I did anything wrong?” I narrowed my eyes and shot a menacing look that by rights should have made him flinch.

Justin wasn’t fazed. He squeezed my shoulder and laughed.

“Dude, you’ve got trouble written all over your face. If a bad idea is in the works, I know you probably have something to do with it. And I respect that.” He paused to offer me a high five. “But that doesn’t mean you don’t have to deal with the consequences. That’s life. Own up, apologize, and move the fuck on.”

“Who are you, and what did you do with Justin?” Tegan asked in mock bewilderment.

Justin swatted his best friend upside the head and jumped out of reach before T could retaliate. He slipped his hand into Gray’s and grinned. “I’m mature now. Right, babe?”

“Something like that.” Gray kissed his cheek and tugged his hand. “Let’s go. See you guys.”

Justin made a phone-call gesture as he walked away, chuckling when I flipped him off.

Apparently, my evil glare needed a tune-up. He raised his brow in challenge.

“Fine,” I conceded gruffly. “Can we drop it? Any second now, you two are gonna leave me stranded at the bar, so let’s end the night on a high note. Help me find some sexy trouble.”

Honestly, I was more interested in changing the topic than anything. I had a mess to clean up and I knew it. But there was no point in stewing over things I couldn’t change.