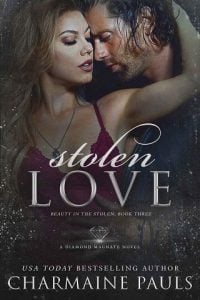 There was a time when I was sweet and naïve. I heeded the law, minded my own business, and lived by the rules. Then I fell for a thief and gave him my heart. He didn’t even have to steal it. I handed it to him wrapped up with a pretty bow on a silver platter. The consequences are my burdens to carry. What happened to me is nobody’s fault but mine. I opened my heart and legs wide while closing my eyes.

I was stupid to fall in love with Ian Hart. He didn’t deserve my heart. He ordered Ruben, a member of his gang, to aim for the very organ I gifted him after rowing me to the middle of the Zambezi River and posing me like a sitting duck in his boat. When I dived into the water in a futile attempt at dodging the bullet, Ruben shot me in the side instead. I fell into a river infested with crocodiles and hippos, a very convenient grave. Indeed, there isn’t a more effective way of disposing of a body. The turbulent water swept me over rapids for more than a kilometer before hurling me over a waterfall.

I should’ve drowned. My defective heart should’ve stopped. The crocodiles should’ve dragged me to the bottom or a hippo should’ve chomped my body in two, but the god of the water, Nyaminyami, had mercy on me. Instead of taking two lives, he only took the life growing inside me. He spat me out on the banks below the falls. I’d rather it was the other way around, but Nyaminyami is a god of tragic love. Being separated from his wife by a manmade dam, he appreciates the suffering of unrequited love. Or maybe he’s punishing mankind.

The children fetching water found me. The men carried me to the huts. The women nursed me. None of them said a word to Ian, the man who owns the lodge on the banks of that river, because once upon a happier time, I was one of them. I worked, lived, and laughed alongside them. Perhaps they kept quiet only because I saved Banga and freed them from the evil spirit who’d taken the shape of a baboon.

It’s a good thing I’m used to fighting for survival. I’ve been fighting since the day I was born. Ironically, my weak heart made me strong. It took me three months to fully recover. The road to healing was painful in more than one way. The physical part was the easiest. The hardest part was dealing with the truth. Ian had ordered my death. The worst was mourning my baby, our baby, and later finding out I’ll never have other children.

One month later, on Christmas day, Ian scattered flowers on the water and declared me dead. That’s what the villagers told me.

“What kind of flowers?” I asked.

“Does it matter?” the women replied.

There was even a ceremony. Shona, Banga, Waitada, and Garai wept as the coffin was lowered into the ground.

What could he put in the casket? Did he sink it empty and lonely into the grave?

“The gun Ian gave you,” Vimbo said, “the one with the ivory grips.”

Ian stood stone-faced, they said, not shedding a tear. The cross stands on the hill that looks out over the river, the place where Ian took me for sundowners when he told me I could be happy there. I always thought there was something sentimental in him. Why else would he have tattooed love, survival, and humility on his skin? I guess I fell into the survival bracket. He planned my murder because he believed I betrayed him. He didn’t love me enough to let me explain. He once told me humility means we carry all the blame for our mistakes but not all the credit for our accomplishments. Ha. I carry all the blame for loving him.

Now there’s a cross at the very place where we conceived our baby, a child he’ll never know existed. It’s ironic but also fitting.

The villagers loaded me into a van with enough food for a week, and the driver smuggled me over the border into South Africa. After the night Ian had stolen me, he’d given me five million rand in an offshore account. I wasn’t planning on ever using that money, but I withdrew some cash. The first thing I bought was a gun. The second was a false identity. Officially, I’m dead. I’m not Cassandra Joubert any longer. I can be whoever I want to be.

I stay on the move between Botswana and South Africa, training every day. With each passing day, I get stronger and faster. Where I’d once sworn I wouldn’t touch the money Ian gave me, I now use those funds for one purpose only—to find the man who killed me. When I do, I’m going to kill him right back.