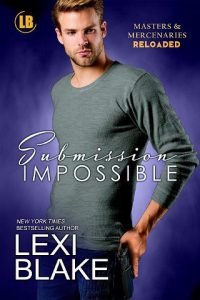 Noelle LaVigne stood at the edge of the big deck in her father’s backyard and sighed because she really did miss this place and her family. It was late afternoon and the heat of the day was only broken by the nice wind coming off the water and the shade from the big cypress trees. She’d spent many an afternoon sitting under those trees and dreaming of her future.

Most of her young life she’d lived in New Orleans, but she’d always thought of Papillon as home.

She missed the bayou and her family, but she was kind of ready to be back in her apartment. Sure there were problems waiting for her in Dallas, but she was optimistic that she could solve them.

Even Madison’s murder, because she was almost certain her rival scientist’s death hadn’t been an accident.

Would Madison have tried to solve Noelle’s murder? Probably not. She’d been a genuinely terrible human being who’d tried to make Noelle’s life hell. Unfortunately, Noelle had been raised to rise above and all that, so she couldn’t look the other way.

And she was curious.

“Hey, sweetie. Do you want something to drink?” Her stepmother walked out from the house where the sound of the game playing rocked the living room. The LSU game was on the big screen, and if her father and his friends’ shouts were any indication, it was going well.

“I know I want something to drink.” Lila’s sister, Lisa, stepped out from behind her, putting a hand to her lower back.

An evil grin lit her stepmom’s face. “You get water. And stay away from the lemonade because I’m pretty sure Zep spiked it with vodka. You’ve got at least another six weeks before you can even think about taking a drink.”

Lisa was heavily pregnant with her first child. She and her husband, Remy, had taken their time. They’d been married for almost eight years when Lisa had announced she was having a baby. It had been fun to watch the big guy go pale at the thought. Lila was having a blast watching her youngest sister go through what she’d already been through twice.

Lisa put a hand on her belly. “I hope my husband is happy with one because this pregnancy stuff sucks.”

Lila chuckled. “Noelle, I want you to listen to your aunt for the next four or five years. Pregnancy is not for you. Until you’re a bit older, and then your dad is totally going to want grandkids.”

Now she was pretty sure she was the one going pale. “No.”

Lila pointed her way. “That is exactly what you should say. For now.” She glanced out over the backyard. “Boys, that Frisbee is meant to be thrown, not eaten.” Lila sighed. “I hope I’m right and that is a girl in your belly because boys…I’m lucky I still have hair. I was totally taken in with stories of how easy Noelle was. Then bammo, I spit out two boys and my life is one long test to see if I can keep two human beings alive. I’m a medical professional. It’s what I do every day, but those boys…Jason, do not try to ride the dog.”

Lila strode off as the boys started to chase each other, and inside the house she could hear the guys shouting their joy over someone catching a ball or something.

She’d never been into sports, but that hadn’t stopped her dad from finding ways to bond with her. Her small-town sheriff father had gone to way too many science fairs to mention. He’d become a STEM dad and put up with chemistry experiments in his bathroom through her teen years.

After the accident that had left her in a wheelchair, he’d supported her when she’d learned to walk again. He and her stepmom had given her the encouragement she’d needed to make her dreams come true, and that was why she came over on football days whenever she was in town.

“I’m good. I’m enjoying watching the kids play.” Her much younger brothers were running around the backyard, swinging on the trees like the crazy little boys they were. She spent so much time in a lab it was good to get out and remember there was a whole world out here.

There was a world she could discover and explore and find out if she had a place in.

“Are you still feeling good about what we talked about?” Lisa kept her voice down. “Never mind. I can see you are.”

Because she was smiling. She could feel it on her face. “I’m excited.”

Lisa leaned over and patted her hand. “I’m excited for you, sweetie. You’re going to have fun and make some great new friends.”

Noelle went silent as her stepmom came back to the porch and checked the smoker that was currently cooking the meaty portion of the evening’s supper. “Those boys are going to give me a heart attack one of these days. Are you sure you can’t stay longer? It’s been nice to have you here.”