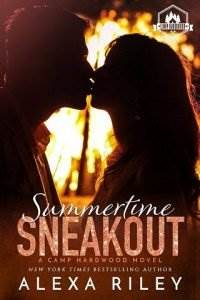 “Are you and Van doing the nasty and you just don’t wanna tell people?” Piper asks as she takes a bite of the breakfast burrito I made her.

I have no idea how she can eat so much food in one sitting. She’s harder to keep full than some of the teenage boys running around here. I’m beginning to suspect she and Van are in a silent competition of who can eat more.

She’s only teasing me, but I don’t need that rumor floating around. My face heats thinking about having sex with Van, but I can blame my rosy cheeks on the hot oven. Not that it matters because Van probably thinks that’s what I always look like since I blush when he’s within ten feet of me. He’s too handsome for his own good, but I wish it ended there. He’s sweet and charming and basically the whole package. I don’t know why he keeps teasing me, though, because he doesn’t do it with anyone else. He doesn’t touch anyone else either, so I wonder if he’s trying to see how red he can make my cheeks.

I jerk my eyes up from the sheet of cookies and over to Piper. She swings her legs back and forth as she goes for another bite of her burrito. Her other hand rests on the small baby bump she’s trying to hide. I don’t know why because she’s tiny and that small bump is only going to get bigger. Especially at the rate she’s eating.

We’re both in the staff kitchen alone right now, but Piper has a voice that can carry.

When I applied to be a cook at Camp Hardwood I thought I’d be in the main cafeteria. I had no idea there were two kitchens. The main one feeds everyone but the second one is in the main lodge where the staff and counselors hang around. I still help in the main cafeteria if they need extra hands but I was moved to the kitchen after my first day. I prepare the weekly menu, but Mrs. Cyprus likes me here. I’m not complaining. In the staff kitchen I get to make more intricate meals and take the time to bake extra sweets for everyone. I was actually surprised how much trust she put in me so quickly. It’s also why I need to nip this Van thing in the bud. He is, after all, her son.

“He’s saying that?” Even I can hear the high pitch of my voice as I drop the sheet of cookies down on the counter.

I know Van has been going around telling people we’re together but we’re not. It all started when one of the counselors, Jack, asked me out as I was walking back to my cabin. I stood there shocked for a moment before Van appeared out of thin air. He threw his arm over my shoulder and told Jack I was his. I nodded in agreement, thinking Van was only saving me because he knew I was shy and Van is a stand-up guy. He’s always doing the right thing.

I know I’m shy and so does everyone else. My face shows every emotion for the world to see, and after Jack saw what happened he looked pissed. I’m sure he walked away and found another counselor to mess around with because he’s always hooking up with someone. Van dropped his arm from around my shoulder and said I’ll give you some time to let that sink in before walking away. Let that sink in? I didn't understand it then and I still don’t understand it. But he’s still telling everyone we’re together and I don’t know what I’m supposed to do with that.

“No, I just wanted to see your face,” Piper says around a mouth full of cookie.

“You’re a brat,” I tell her, even as I make my way over to one of the giant refrigerators to get her a glass of milk.

I know he wouldn’t tell people we were having sex. He might tell people we’re together but he’s not an asshole. He’s not the type of guy to go around bragging about who he’s banging, but Jack would. Plus, I’m pretty sure Van’s mom, Honey, would whip his ass if she found out he said that. She’s as sweet as her name, but Mrs. Cyprus has a bite to her when she needs it. She’s a mother bear not only when it comes to her son but to all the people around her too.

I hand Piper the glass and she winks at me. She and I have become fast friends since we were paired up to share a cabin. At first I was a little worried she was as introverted as I am, but once she started talking she hasn’t stopped. She can carry on and on, but I don’t mind. I like having her to fill the silence while I cook.