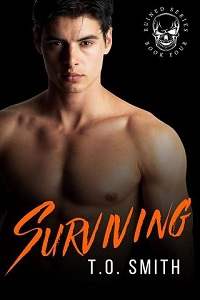 Touch her, and you answer to me.
I wasn’t ready to be tied down to her, but like hell was I letting anyone else touch her.
But when I almost lose her to a rival club, my mind changes instantly.
I’m letting her lay claim to me. I’m tattooing her name on my neck.
And I’m going to burn this entire world to the ground to get vengeance for what happened to her.

Some men knew what they wanted and took it. Others . . . well, not so much.

When you first looked at Samuel Drew, you thought he was one of those men that knew what he wanted, took it, and claimed it all in one go.

I thought he would have done that with me, but I was sorely mistaken.

Ever since the night the clubhouse had gotten ambushed a few years ago and I’d gotten shot in my shoulder and again in my thigh, Sam had staked a half-assed claim on me. He’d led me to believe that we were going to stop running circles around each other and actually be together. God knew I’d longed for him long enough.

That wasn’t what Samuel had meant when he said he was done playing games, that he wanted me. He didn’t want exclusivity on his side, but he expected it from mine.

And any time I tried to fuck around with some other club guy, Sam fucked me to remind me who I belonged to. We played a twisted, fucked-up game every single day, and the game was beginning to wear me the fuck out.

Because Sam didn’t have the right to dictate who I fucked and flirted with if I couldn’t have the same in return. It wasn’t fucking fair. But that wasn’t stopping him. He made it clear that I belonged to him. And in turn, I just looked like a fucking fool when he slept with the club bunnies.

But I was weak to him. I couldn’t ever turn him away. There was something about Samuel that called to the darker side of me—the side of me that had been tainted, had been ruined.

I’d come to the Fathers of Mayhem a few years ago, seeking an escape from my mom and stepdad and the shit they put me through. River offered me protection without asking me a single question about what I was running from. And to this day, he still hadn’t asked.

The only time River had asked anything about what happened to me was when I’d been raped by one of his own men, whom he and Samuel had then taken out back, castrated, and murdered.

I looked up at Adelaide as she stepped into the kitchen where I was putting together a roast in the massive crockpot we had. She yawned, her hair still a mess on the top of her head. “Do you ever sleep in?” she asked me.

I snorted in response. I hadn’t slept during the night in a long time. Hell, I couldn’t remember the last time I had, to be honest. Normally, I snuck in a couple-hour nap during the day, and I functioned on that.

And that was something else Sam didn’t know about me because as soon as he nutted inside of me, he was yanking up his jeans and storming out of the room, like he was pissed off that he wanted me so badly.

I was always on my own at nighttime, so I normally read a book to pass the time. The dark held too many threats, too much danger, too many demons. I didn’t feel safe.

“Eh, sleeping in is for pussies,” I teased her. She rolled her eyes but grinned at me. “Coffee is already made,” I told her, waving the knife in my hand towards the coffee pot that contained freshly-brewed coffee.

“Fucking heaven in a cup,” she muttered as she began making her some. “The men are riding back in tonight,” she told me. “Pretty sure the Sons of Hell are riding in as well for some rest before they head back down south. You got enough food there for everyone?”

I nodded. “Should be more than enough so long as everyone only grabs one helping.”

She shrugged. “If they’re still hungry after one serving, they can grab a bag of chips or some shit.”

She strode out of the kitchen, leaving me to my thoughts again. I sighed as I resumed chopping the onion on the cutting board. The men riding back in tonight would mean Sam was with them. I’d honestly been enjoying the break from him. He always made me feel like I was on edge, treading on eggshells, waiting for something to smash.

He was so dark and broody. And I knew he could be gentle. He had been when I’d been lying on that hospital bed after surgery, after almost dying.