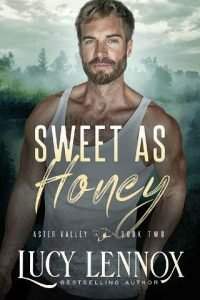 Everything was going fine until I saw the bumblebee. It was the third day of my road trip from Houston to Aster Valley, and I’d finally arrived. It was as picturesque as any other ski town in Colorado was in late spring, but smaller and with noticeably fewer tourists since there wasn’t any actual skiing here anymore. Considering I’d never heard of Aster Valley before my best friend, Mikey Vining, and his very rich, very good-looking, very adoring football player boyfriend, Tiller Raine, had left me behind in Houston and bought themselves a giant ski lodge in town earlier this year, I wasn’t surprised.

But I was surprised when I saw the teen-sized bumblebee being chased through a large patch of wildflowers on the side of the highway by a man who looked at least twice his size. The last thing I wanted was to get involved in someone else’s drama—hell, I’d left Houston specifically to get away from my own—but if there was one thing I couldn’t abide, it was bullying. I’d gotten enough of that myself as a kid from my own father.

I wrenched my bike over to the side so fast I almost crashed into an old, half-broken-down billboard advertising a ski resort that must have been just the thing in the 1980s.

My friends teased me for my deep growl, saying I sounded annoyed at the least and angry at best, but in times like these, it came in handy.

The bigger man stopped and stared at me, and the bespectacled guy in the ridiculous bee costume froze like a squirrel caught stealing from the bird feeder. “Mind your own damned business, asshole,” the bully said.

His eyes were wide with fear, and his antennae were trembling. Despite both of those things, he was trying very hard to smile as if everything was normal. “Um, I’m fine.”

He was clearly not fine. I pulled out my phone and pretended to dial. “How about I call the police just in case?”

“Yeah, good luck with that.” The bully shoved the bee until he fell on his fluffy yellow ass. “This isn’t over, Truman.” He shoulder checked me hard on the way past and disappeared around a bend in the road. I noticed a heavy trace of alcohol coming off him.

I reached out for the bee’s hand and realized he was an adult and not the teen I’d first assumed him to be. “Let me help you up,” I grunted, suddenly feeling oddly attracted to the little bee. He had a pretty face with delicate features and cherry-red lips almost hidden under a crazy tumble of dark brown curls.

“I’m sorry to bother you,” he said in a soft voice, getting to his feet. “You could have just kept on going. He probably wasn’t going to hurt me very badly. And, really, everyone has their issues, you know?”

Just then, a tricked-up truck with a heavy metal push bar on the front came careening around the corner from the direction the bully had gone. It deliberately headed straight for my bike, pushing it into the stone base of the town sign with a sickening crunch. The asshole shot me the bird, called me a few choice names, and then did a three-point turn before hauling ass away from us.

I looked back at the bee, who simply stared after the pickup. “Oh no,” he said faintly. “No, no. He wasn’t supposed to do that. He… that wasn’t fair. You were just trying to help.”

“Who the hell was that guy, and what the hell’s his problem?”

“That’s Patrick Stanner,” he said, like that should mean something to me. When I shrugged uncomprehendingly, he added, “Brother of Craig Stanner? Son of Kimber and Gene Stanner? Nephew of Erland Stanner? Still no?”

He must have noticed the blank look on my face, because he cleared his throat and continued. “Huh. Well, anyway, his family fell upon some hard times and lost everything to the banks. And it was kind of because of me, so whenever he gets in a certain kind of mood… he finds me and gives me what for. Usually it’s not so bad.”

I opened my mouth to ask him why the hell he thought any of this was his fault, but he let out a nervous laugh and said, “I can’t believe I just told you that. Please forget I said anything. It’s not… it’s… it’s fine.”

He looked everywhere but at me, and I couldn’t tell if he was embarrassed or nervous. I knew my large frame and stern face, not to mention the bike, could give off the wrong impression of me, so I stuck out my hand. “Sam Rigby.”

The bee’s eyes widened even more behind a pair of dark-framed glasses when he slid his hand into mine. “Oh, uh… Truman Sweet.” Suddenly, a pink blush appeared on his cheeks and his dark eyelashes flitted softly as his nerves got the better of him. My throat suddenly felt dry.