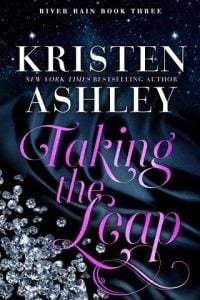 He was flirting with me.

John “Rix” Hendrix, the coolest guy I’d ever met, the most interesting person I’d ever known, the most handsome man I’d ever seen, was flirting…

And I was somehow managing to flirt back (kind of).

Okay, I might be relying on something from Moscow to do so (that something being their mules), but it was happening.

And I knew I wasn’t making more of it than I should.

I knew that because Chloe and Judge were with us. We were out having drinks, celebrating the official beginning of our new Trail Blazer program (that day, Judge, Rix and I had signed on to new job titles with new responsibilities and new salaries with the expanded program—I got a promotion and a fifteen percent raise!—definitely worth sitting down to drinks with the man who terrified me most on this earth).

Chloe was giving Rix and me smug looks, but mostly me, and once, she’d even winked at me.

As an aside: Chloe Pierce, my boss Judge’s girlfriend, was the coolest, most interesting, most gorgeous woman I’d ever met.

And even though (fortunately, so far, though maybe not now?) Rix had missed it, but although she hadn’t said anything, I knew Chloe knew I was crushing on Rix…big time.

And I had been.

She was happy for me.

I was happy for me!

Because Rix was flirting with me.

And the reason why this was crazy was not only because he was cool and interesting and handsome, and as yet, such a man had never shown any interest in me (no, the men who had shown interest in me lacked one or more of those qualities).

It was because I was, well…

Not to mention, I knew how to put on mascara, I just wasn’t a big fan of wearing it (so, unless it was a super special occasion, or I was with my family, I didn’t).

I had a little house up in the mountains (TBH, it was more like a big shack), but I was rarely in it because there were a lot better places to be (and my house was awesome, I just had a ton of interests and not a lot of them happened in my house).

I knew how to cook in a kitchen, but I cooked way better over a campfire (and in a hot coal pit).

There were Star Trek nerds, I was just a star nerd (that being, lying under them at night in the middle of nowhere and staring at them until I fell asleep).

I would rather snowshoe into a forest in the dead of winter, set up a tent and spend a couple of days in nature, reading by a headlamp at night cozied up in a one-woman sleeping bag in a one-person tent than sit by a fireside during a snowstorm with a mug of hot cocoa (though, that was nice too).

Many women didn’t get me.

Men didn’t either, and it was actually more men who didn’t get me than it was women because I wasn’t stereotypically womanly. Most woman got there were lots of different kinds of women. Most men (in my experience) weren’t that broad minded.

No, actually, it was more my family who didn’t get me than anyone else.

My family didn’t get me at all.

Which wasn’t really surprising, seeing as I didn’t get them either.

“Sexy as fuck,” Rix was saying.

I came out of my musings to focus on his words.

Words of which one of them was “sexy.”

A flutter assaulted my belly at hearing his gravelly voice utter that word (at me).

“What?” I whispered, like talking louder might break the spell of how close he was sitting, leaned in even closer, talking to me, but doing it with his attention centered right…on…me.

“That glass dome glamp sitch in Joshua Tree,” he answered, reminding me what we’d been talking about. “Never thought I’d say those words, glamping is better than not camping at all, it just isn’t my gig. But it was just that fuckin’ awesome. Bedding down under the stars at night…”

He was into sleeping under the stars just like me!

“Waking up with the sun…”

That wasn’t as great as stars, but it was cool.

Something happened to his eyes which saw results in specific parts of my body before he finished.

“The shower that was top and sides all glass. Getting wet and clean with a near-on three-hundred-and-sixty-degree view of the Joshua trees and the desert. Only thing missing was I didn’t take a woman with me.”

That meant it was my turn.

“You’ll have to…” My voice was clogged due to the fact my mind was on Rix in a shower that was all glass. Rix…wet and slick and slippery…in a shower that was all glass. So I cleared my throat, and when I did, his lips hitched in a way that those specific parts of my body, already perked, became veritably primed. “Text me the deets for that. I, uh…don’t usually glamp but…”