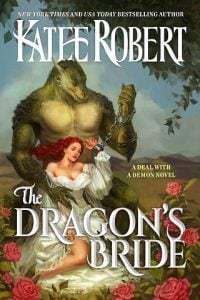 Now, I’m signing a contract with one.

Life comes at you fast.

My body is one large, throbbing bruise as I try to focus on the words swimming before my eyes. “I don’t want to do this.”

“I’m aware. People don’t make deals with me unless they’re desperate.” The demon doesn’t look much like a demon. Then again, what do I know? Maybe all demons are handsome, dark-haired white guys whose shadows don’t quite line up with their bodies.

I press a hand to my head. My brain feels like it’s sloshing around inside my skull. “How did you even find me?”

He shrugs. “Desperation has a certain flavor. One of my people happened upon you last week and brought you to my attention.”

Last week I was doing my best to covertly arrange an escape route that my husband Ethan wouldn’t know about until it was too late. The plan had been to flee while he was at work and disappear without a trace. I thought I’d had every factor accounted for, but I was so damn scared.

“I thought I was getting out.” It feels very naive to say it now. Three days ago, I’d laughed in this stranger’s face, had been determined not to put myself under the control of another man—human or no. Who comes knocking on someone’s door in the middle of the day, offering a demon deal? Apparently Azazel does. It was all so normal and yet strange, but how could I worry about this alleged demon when my personal monster was so much closer to home and more dangerous?

I was getting out. Or so I thought. That was before Ethan managed to figure out what hotel I was staying at. Before he came here and… I shake my head, which only makes the nausea worse. “It’s very likely that I’m concussed. This kind of deal won’t be binding in court.”

Azazel’s dark gaze tracks to the right side of my face. I’ve seen what I look like. Bruises on top of bruises, which doesn’t make sense because Ethan only hit me once before one of the other hotel guests came running down the hall and stopped him. A good Samaritan who probably saved my life.

Next time, I won’t be so lucky.

I close my eyes and take several slow breaths. It doesn’t help, but I’m not sure anything can help right now. I’m out of options. Desperate, as the demon says. Maybe if I had family to run to, things would be different, but even if I did, I’d just be endangering them as well. I could go buy a gun, but I’ve no faith that I’m capable of murder, let alone that the justice system would land on my side. All their grace seems to be saved for the predators themselves.

“Would you like me to read it to you?” I don’t think this demon is capable of sounding soft, but he’s gone quiet in a way that makes the small hair at the nape of my neck stand on end.

I open my eyes to find him still staring at my face. Even as I tell myself not to, I lift a hand to press against the swollen skin around my eye. “I’m sure that would be convenient for you. You can leave out whatever you want.”

He sighs, an almost imperceptible sound. “Deals are sacred, Briar Rose. I’m willing to play dirty leading up to them, but there are no tricks in the fine print. It’s in everyone’s best interest that my…clients…go into things with their eyes wide open.”

The horrible feeling of there not being enough air in this dingy hotel room gets worse. “Did you tell him how to find me?”

Azazel narrows his eyes. “I didn’t have to. He knew about your secret credit card. After you left, he tracked the charge to this place and sweet talked the front desk girl into giving him your room number. He told her he wanted to surprise you for your anniversary.”

I don’t ask how he knows that. He seems to know a lot of things he shouldn’t. I stare down at my fingers, nails bitten down to the quick. A horrible habit of mine, one that’s only gotten worse in the last few days. “Rookie mistake.”

“Fear makes fools of us all.”

He’s not exactly being nice, but he’s not being particularly pushy, either. I slump back in my chair and motion at the contract. “Go ahead, then.” It’s not like I have much choice. I’m going to say yes, and we both know it. In this moment, I’m barely holding it together, my strength so brittle that if he pushed, I’d fold in an instant.

Azazel plucks the contract from the desk and moves to perch on the edge of the worn-looking bed. He glances at me and then begins to read. It’s nothing more than I expected; he’d already laid out the details three days ago.