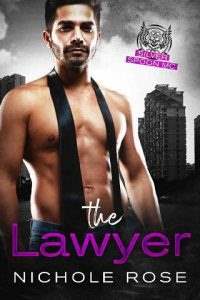 Something about this grumpy lawyer fits this sunshiny runaway just right…
Jude “Fifth” Despora
Someone has been sleeping in my bed…only it isn’t me.
And I didn’t give her permission.
But when I finally come face to face with my little intruder, she knocks my world out of orbit.
Devin Arakas is the sweetest little treat I’ve ever seen.
But I’m a lawyer, and she’s off-limits.
Until I find out why she’s hiding in my bed.
Devin Arakas
I grew up in the biggest crime family in Texas.
I love them like crazy, but I’m not ready to go back to Houston.
Silver Spoon Falls is where I belong.
So when my brother and uncle show up to take me home…I run.
I didn’t mean to get caught in Jude Despora’s bed.
But I don’t want to leave it either.
Something about the overprotective, gruff lawyer fits me just right.

"Who the fuck has been sleeping in my bed?" I growl, stomping into the living room of the Silver Spoon MC clubhouse where my brothers are gathered, preparing for a run. I was supposed to go with them, but that's not happening. I've been in Houston all week with Adam and Fischer, two new lawyers at my firm. We're trying to convince a pain in the ass judge to release one of my clients. She's a single mom with a special needs daughter. Holding her until trial is fucking stupid. She isn't going anywhere. She shouldn't be facing charges in the first place. As far as I'm concerned, she did the world a favor when she shot the asshole abusing her.

"Uh, you?" Declan "Bender" Valentine pushes his dark hair back from his face, looking up from the baby on his lap to smirk at me. "All by your motherfucking lonesome."

"Fuck you very much for the reminder that we aren't all living in domestic bliss," Cormac "Giant" Carmichael grumbles, scowling at Bender.

His wife, Catriona, smacks him on the shoulder, telling him to hush. He just smiles. These days, he's always smiling. His sister is home, and his wife is pregnant. His life is all aces as far as he's concerned.

"I told you I heard something in his room last night, Tate!" Samara cries, smacking our VP on the chest at the exact same time. Women. Swear to God, they communicate every strong belief through their delicate little hands. Usually with a well-aimed smack for emphasis. It's fucking cute as hell. "But you wouldn't listen."

"Baby girl, the only thing you heard in there was a fucking mouse," Hands tells her, trying to ease her mind. Hands is protective of Samara and their baby girl, Scout. Nothing upsets them if he has a say about it. I don't miss the grim look he and Jason "Cash" Montoya, our president, share, though. Something is up.

Fucking great. I was kinda hoping for a break from the bullshit for a while. We've had more than our fair share of that over the last year. Between Playboy's father, a rival MC, Bender's girl being taken hostage, and half the goddamn club falling in love, I've been running flat out all year.

I'm exhausted and irritable as fuck. I haven't even been home in a week. I came straight here when I got back into town an hour ago. Can't a man take a weekend off?

"Hands, Fifth, help me carry this shit out," Cash orders, nodding at the already packed bags piled in the corner. He could easily carry them himself. Which means he wants to talk.

"Yeah," I sigh, stomping forward to grab two of the bags. Hands passes their baby girl to Samara and then drops a kiss on her forehead before grabbing the other two. Scout jabbers at him, flailing her little arms. She's growing like a weed now that she's out of the woods. She doesn't even look like the same dangerously sick baby we met in the hospital six months ago.

We file out of the room behind Cash, headed for the front door.

I squint my eyes against the early morning sunlight, scowling. It's too bright and cheery out for early February. Hell, maybe it's too bright and cheery out for me. I've turned into a crabby motherfucker lately. All work and no play will do that to you. But I have a law firm to run, an MC to protect, and clients like Betty to defend. It doesn't leave a lot of time for anything else.

"Everything go okay in Houston?" Cash asks, leading the way to the row of bikes lined up outside the clubhouse beside his Escalade. The whole club is making a charity poker run to Dallas, wives and babies included. We do it every year to raise money for the pediatric hospital where Hands works. "You get your client out?"

"Not yet. The judge is being a dick," I mutter. "She has a previous assault conviction from ten years ago, so he wants to throw the book at her."

"I'll get her out eventually." Since opening my own firm, I don't take a lot of cases myself. Those I do are usually like this…domestic violence victims who can't afford decent representation. Stand Your Ground doesn't mean much when you're a woman. It certainly doesn't here. This prick claims she shot him for the hell of it. Her bruises tell a different story, but they arrested her on attempted murder charges anyway. The D.A. is willing to let her plead down to aggravated assault, but fuck that. I'm not letting her go to prison for saving her own life.

But Cash didn't call me out here to talk about my case or the criminal justice system.