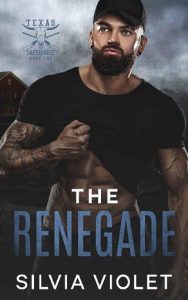 I was born to be a protector, and Jacob was born to be mine.
As a marine, I followed my gut and defied orders.
I was left with a stain on my record and nowhere to go until an old friend pulled me back into the world of organized crime.
Paradise Ranch is my home now, but my life is far from easy. It’s filled with dangerous men, threats to those I care for, and enemies who’d like to bring my entire operation down.
I don’t have time for a relationship, but when a scared young man comes to me for help, I can’t say no. I also can’t keep my hands off him. How can we make time for our tender feelings, when danger lurks everywhere we go?

After the bartender handed me my drink, one of the servers caught my eye. I watched the gorgeous man as he grabbed napkins and silverware to add to his tray. He was younger and leaner than the guys I usually went for, but my type had been restricted to the men available to me while I was deployed.

Maybe now that I was back in the States, I could enjoy more variety. There was just something about the way the young man moved, and his hands… Shit, if I was thinking hands were sexy, I really was overdue for a hookup.

The young man looked my way, and I didn’t bother hiding the fact that I’d been staring. His eyes widened before he turned and hurried off to a table. I watched his ass until he disappeared around a corner. As appealing as going after him might be, he was working, and I was there to meet an old friend, not to pick someone up.

A few moments later, I watched X cross the room toward the corner booth I’d selected. As always, people instinctively moved out of his way. Everything about him screamed power, but he was more relaxed than I’d ever seen him. To me, his movements were almost languid compared to his usually rigid stride. I’d met him during a joint operation with his company of Army Rangers. I’d been impressed by his intelligence and leadership abilities.

He held out his hand, and I rose and shook it. “You look damn good. What have you been up to?”

He laughed. “Other than a hell of a lot of things I’ll never speak of, I fell in love.”

I could count the people I found scary on one hand with fingers left over. This man was one of them, but now he had a dreamy look on his face.

“For real?” I’d heard he had a boyfriend, but I hadn’t realized it was that serious.

“It’s very real. Find yourself a man now that you’re back in the States. You deserve that.”

I’d come back to Texas after making my military career crash and burn and dragging my brothers down with me. When I’d left for the marines, my plan had been to return to horse ranch work after I left the military, hopefully finding a foreman position like the one I’d inherited when my father died. I’d hoped to eventually save up enough to open a small breeding operation of my own. But a job like I wanted wasn’t easy to come by for someone with an other-than-honorable discharge. So far, all I’d done was scroll through job ads and feel sorry for myself. I’d been home a few weeks when X had called me and told me he had a job that was perfect for me.

I shook my head at his assertion that love would fix any of my problems. I needed to focus on finding a way to support myself and my brothers. Friendship and sex were things I could worry about later, and love wasn’t a complication I needed. Seeing X looking so damn happy almost made me reconsider the future I wanted, but that was a dangerous path to go down, so I changed the subject. “Tell me about this proposition you have for me.”

“I’m assuming your years in the desert haven’t made you forget how to handle a horse.”

“Hell no.” At least I hoped they hadn’t. I’d been itching to get back on a horse since I’d gotten home. The easiest way to do that was to go see Rogue, but I hadn’t been ready for that yet.

I studied him. “Seriously?”

“No need to be an asshole. What’s the catch?” I didn’t think for a moment X had bought some Texas property so he could play weekend rancher.

This time he gave me the sly smile I was used to seeing from him. “Paradise Ranch is real enough. The previous manager ran a small but successful breeding program similar to what you’d like to have for yourself, but it’s also a safehouse.”