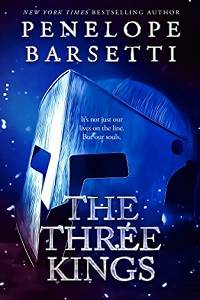 My husband betrayed me.

I’ll ask Queen Rolfe to break our marriage. We both want it.

Not to mention—she owes me.

When I stepped into the room, I found my mother on the floor. She lay beside the portrait of my father, as if they were sleeping side by side once again. Her face was distorted from all the puffiness, and her skin had a permanent shine from the rivers of tears down her face. She must have heard me walk into the room, but she continued to stare at the ceiling as if she hadn’t.

She slowly turned her head to me, as if she’d had no idea I was there until now.

“I need to show you something.”

Her eyes remained defeated, like she didn’t care in the least.

“Come on.” I extended my hand to her and pulled her to her feet. She was my queen. My commander. The woman who taught me the sword and the ax. It killed me to see her so weak, to witness her heartbreak, the damage she’d carried in silence all these years.

As if she were a frail old woman, she held on to my arm as I walked her to the other side of the basement. We made it to the cage, Faron’s head pinned to the back of the chair, the sword sticking out.

She stilled, her breathing deepening.

“Father is avenged. As are you.”

Her arm slipped out of mine as she moved forward, her spine straight, her shoulders back, her majesty returned. She stepped through the open door to get a closer look at him, to see him executed the way my father had been. Her breathing grew labored. Her hands came together at her waist. She remained that way for a long time, looking at his dead body, his bloody teeth.

Then she spat on his face. “Delacroix belongs to the Rolfes. Always has, always will.” She stepped out of the cage and returned to me, her fingertips dragging down her face to wipe away the shine of her tears. Once she gathered herself, she turned her eyes on me. “Did she grant you permission?”

It was bittersweet to watch my mother get the last word. But the pain immediately followed afterward. All I could muster was a shake of my head.

Her eyes sharpened. “You broke your promise.” Judgment was in her voice. Even disappointment.

Her eyes softened briefly, touched by the love in my heart, but then they returned to disappointment. “I haven’t seen his face in twenty years. I did my best to preserve it in my memory, but his features began to fade more with every passing year. To see him again… It shattered me. I hadn’t had a chance to grieve. I’d been too busy surviving. Too busy fighting. But I finally had my opportunity to feel the hurt.”

“Faron deserved what he got.”

“You’ll hear no argument from me, Huntley. But your wife deserves a husband who keeps his word. You shouldn’t have done that.”

It was a shock coming from her.

I nodded. “She walked in afterward.”

Her whole face tightened in a grimace. “Huntley…”

I knew the situation was dire. It couldn’t be fixed with a kiss, by calling her baby, not even with an apology. I knew I was fucked.

She stared at me with her observant eyes, seeing emotions on my face that no one else would notice. “You better hope she loves you enough to forgive you. That’s your only chance out of this.”

“She’s bound to me forever, so it’s not like she can escape me.”

“She can if she kills you.”

My breathing stopped entirely. The thought hadn’t crossed my mind. “She wouldn’t do that.”

“That promise was her condition to marry you. You broke it—so she doesn’t owe you anything anymore.”

I was glad he was dead, but now I wished I could take it back. “I didn’t expect you to feel this way. I thought you would be too pleased with his death to think about Ivory.”

“I’m not thinking about her.” She was a foot shorter than me, so she always had to tilt her head back to address me, but her presence was just as forceful as mine. “I’m thinking about you, Huntley. I know how important she is to you, and once you find someone you love, your loyalty is to them and them alone.”

“My loyalty is also to you—”

“It changes once you’re bound to another person. Your promise disappointed me, but I also respected it. Where is she?”

“I don’t know.” I let her go because she was too upset, and she clearly wanted nothing to do with me. To pursue her would just have made the situation worse. “She needs space right now.”