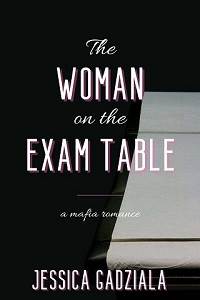 He was not the kind of man meant to fall in love.
He was the proud enforcer of the Costa Family who perhaps enjoyed the violent, bloody parts of his job a bit too much.

All that changed, though, when he was put on a job that had him crossing paths with a woman who changed everything.

She was not the kind of woman to have hope.
The life she found herself trapped in had very little to look forward to.
Until a dark figure turned up and showed her a way out.

"This book is a work of fiction. The names, characters, places and incidents are products of the writer's imagination or have been used fictitiously and are not to be construed as real. Any resemblance to persons, living or dead, actual events, locales or organizations is entirely coincidental."

“Move your ass, new girl,” my boss snapped at me as he moved between me and the back counter, grinding his whole front situation against my whole… back situation.

Biting my tongue was an art I was, luckily, practiced in, thanks to decades in the workforce, dealing with various superiors who took their title to heart and believed themselves very much above everyone in their employ.

I hated this job.

Every single minuscule aspect of it.

From the obnoxious “retro” dress in a bright blue color with a white collar, buttons, and matching apron to the way the scent of grease almost seemed permanently embedded in my pores, to the often impatient and rude customers, and the crummy pay.

But there was nothing I hated quite as much as I hated my boss.

Tommy Dolin was all of five years my senior, but his years hadn’t treated him quite as kindly. On my more bitter days—which were happening more and more frequently lately—I would claim that his outside had just slowly but surely caught up with the ugliness inside.

Tommy was five-four with an extremely round head and face, wacky brows that shot off in all directions, small dark brown eyes, and a head that was eighty-percent bald. He refused to accept the latter fact and shave it off completely or invest in some hair regrowth solution, choosing instead to actually comb over little strands from one side of his head to the other like it would hide the baldness beneath.

I mean, who actually had a comb-over these days?

He had a love of camp shirts that didn’t fit, making the buttons pull across his belly, and slacks that he wore way too low down. Meaning you never wanted to look in his direction if he just so happened to bend over.

In my experience, a lot of the world’s ugliest souls had some of its most beautiful faces. It was sort of refreshing to have a case like Tommy. Where it was all-around bad.

I would never have stayed working for him if it wasn’t necessary. But it was. And I didn’t have time to waste trying to find another job.

It was only temporary anyway.

So there was a good chance I might be dealing with Tommy for a while. Which was why I bit my tongue and slid away to grab the pot of coffee I’d just brewed for an extremely particular regular of mine who insisted he get a new pot each time he came in, so I’d gotten it going when I saw him walking in the door.

The other girls claimed that since he didn’t tip well, I should just tell him to eff off, that I didn’t need any extra work. But, I don’t know, he sort of reminded me of my grumpy old Great Uncle Robert, so I had a strange fondness for his curmudgeonly self.

“New girl, eh?” Danny, my regular, said with a quirked brow as I made my way to his table. “That’s stretching that word, don’t you think?”

“Hey, look who’s talking, old man,” I said, getting a chuckle out of him as I poured him a cup of coffee.

“Gonna miss that smart mouth when you go back to teaching,” he said, genuinely looking upset about the prospect.

“Well, Danny, you might be in luck. The way things are looking, I might be pulling two jobs for a while,” I told him.

“It’s a shame you don’t got yourself a man to ease that burden,” he said, as he often did. A retired widower who worked his fingers to the bone so his wife could live a nice, comfortable life, he was forever going on about my singleness. “Don’t get why you don’t. You’re sure pretty enough.”

I couldn’t help it. My gaze slid up the large picture window, looking at my obscured reflection.

It was the same one that greeted me in the mirror every day as I slipped into the ugly blue dress and apron. Except, maybe, my hair had gotten a bit messy from the hours on my feet, running around.