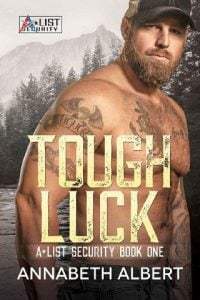 “I have a job for you.” Duncan placed two coffee mugs on his breakfast bar as I emerged from his guest room. Damn it. I should have stayed in bed, even if I’d been awake for hours, waiting for a suitable time to putter around in his kitchen. But now he’d beaten me to the coffee maker, and his too-efficient tone said I wasn’t going to like whatever this was.

“No.” I picked up the mug with black coffee as opposed to the one with a pale-colored brew with flecks of cinnamon on top. Duncan always did like his coffee too damn fancy.

“You’re not going to let me tell you about it?” Nose wrinkling, he adjusted his tie. Seeing Duncan all fancy was still weird as fuck. My brain still expected to see him in fatigues, not some pricey suit with slick hair and shiny shoes.

“This rent-a-SEAL deal, that’s you and Harley, man.” I didn’t need to hear about the job to know it had to do with A-List Security, the company he and our fellow buddy from the service were starting. They’d been on me for months to join them, more so since I’d landed in Duncan’s bedroom post-separation from the navy.

“You need a job. A plan.” Duncan’s tone had been way more patient when I arrived a week earlier, but now his voice had that lieutenant edge.

“R&R doesn’t count?” I wasn’t letting him bully me. The ink on the separation papers was barely dry, and I’d come straight off a deployment to have to deal with retirement shit as it was. “Feels like I could sleep for a month.”

And yet I couldn’t seem to stay asleep for anything, but Duncan didn’t need to hear about my insomnia woes.

“Damn right, you need rest.” Duncan clapped me on the shoulder. He was slightly shorter but had big hands and a near-crushing grip. “But you also need to figure this out. You let retirement sneak up on you. You’re only thirty-eight. You could even go to college—”

“Stop right there. I’m not going back to school.” As if. I’d barely made it out of high school, done the exact minimum to get myself a ticket to basic training. Last thing I wanted was to be stuck in some classroom. “I’ll find something.”

“But I have something.” Duncan smiled, charm turned up to eleven even in the face of my grumpiness. “Consider this a personal favor to me. It involves Danny.”

“Your brother, the former TV star?” Part of why Duncan fit in so well here in LA with his new high-rise lifestyle was that his blood actually ran Hollywood gold, not navy blue. There was no escaping his legendary movie producer dad or his famous brother, even if Duncan had fled to the naval academy trying. “What did the kid do this time?”

“He’s twenty-five now, as he keeps reminding me. Trying to get his life together. Again. Man, I really hope the changes stick this time.”

“Here’s to hoping.” I saluted him with my coffee. I wasn’t sure a kid who’d famously posted a drunken base-jumping video among other antics could change his stripes for good, but Duncan’s eternal optimism was an admirable trait.

“Word. Anyway, for once, it’s not gossip columns that are the issue. It’s his safety.”

“Safety?” Despite not wanting anything to do with this job, curiosity got the better of me.

“I think he has a stalker.” Duncan paced away from the counter, long efficient strides that carried him to the pantry, where he grabbed a protein bar before returning. “Danny’s trying to pass it off as some rabid superfan, but I’m not so sure. He was the one to call me for once, and he was all full of questions like how to spot a tail and how to adjust location settings on his phone.”

“Shit.” I whistled low. “Doesn’t the kid have some kind of bodyguard already?”

Unlike Duncan, I was the furthest thing possible from Hollywood, but I’d watched enough TV to know big stars always had entourages.

“Nope.” Duncan tore off a bite of protein bar with his teeth. “Danny’s on this let’s be a normal guy kick and apparently no longer has staff beyond a weekly cleaner.”

Simply the ease with which Duncan said staff showed how many light-years apart our upbringings were.

“No clue. He freaked at the idea of me running a check on the cleaning service too. But something’s up. He sounded legit scared, and I can’t let it drop even if that’s what he wants.”

“Yeah.” Duncan was the type to worry for a new recruit he barely knew. Of course, he was going to worry about his little brother.

“He shouldn’t ignore warning signs. You’ve told me enough stories about those fans being crazy fuckers.” That was putting it lightly. Duncan’s brother had spent a decade or so on a show so popular it had its own conventions, merch everywhere, and fans so intense they had ridiculous nicknames for themselves. They’d famously staged a campaign to get more seasons of the show, resulting in a whole studio getting shut down for a bomb threat. Yeah, Danny’s fans were no joke.