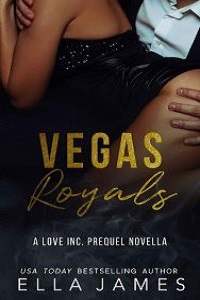 IT’S EARLY SUNDAY MORNING, and I’m coming off a two-day tournament. I’m tired and hungry, chugging down a DeVille bottled water as I steer my Aston Martin through the clot of traffic on The Strip, crawling toward the private airport behind the golf club.

I won again, with a full house over queens in the last hand, but it was closer than it should have been. I collected my chips just after midnight, and we wrapped the show at 1:30. There was a room at the Bellagio for me, but I’m sick of the Bellagio. The last two times I stayed, I found company in my suite. I didn’t ask for any company.

I’m flying to the vineyard: my house, my big bed, absolute quiet. I won’t get to sleep for another couple hours—I can’t sleep on the Gulfstream—but it’ll be worth it once I get there. I’m tired of Vegas.

I’m still dressed in my poker black, and the jeans and button-up feel like sandpaper on my skin. I take another gulp. My head is throbbing like I just snorted a gram, but I didn’t. Four months sober. Four months celibate, too. No real reason why. I just got bored.

I’m starting to get that empty, ill feeling in my stomach that comes from lack of sleep when my buddy Marchant starts blowing up my phone. I let it ring as I navigate South Maryland Parkway. Twice, three times, four… On the fifth call, I pick up, sounding more pissed than I mean too. “What do you want?”

I groan, because I can hear in his voice that Marchant is hyped the hell up. “You got a favor you want to do for me?” I drawl. “Cause I could use a favor.”

“Nah, man.” He hesitates, the way he always does before he drops a bomb. “I need you to come out here. I’ve got something going on. I need you to run backup.”

Run backup? I’m not sure what that means, but I can already tell it’s going to be a pain in my ass. “You must be out your mind. It’s two forty-three.” I move the phone away from my face, scowling. “Are you rolling?”

“What? No. Look, just—hold on just a second.” I hear shuffling, followed by Marchant’s hiss as I roll into the parking lot of the tiny private airport where I keep my plane.

“Dude,” he says, after a moment of muffled static. “I got Priscilla Heat out here.”

He pauses, I guess expecting me to be impressed. When I’m not, he says, “She wants me and some of the girls for one of her videos.”

I shake my head. “I’m at the airport, March. I’m going to the vineyard for a little R&R.”

“You’re a bourbon heir, Hunter. You shouldn’t even have a fucking vineyard.”

I hit a button on my steering wheel, the garage door lifts, and I slide into the fourth slot in the garage. It’s dark in here, making me ache for sleep. “The word is ‘no.’ Have Rachelle watch the ranch for you.”

“C’mon, man, this is Priscilla Heat.”

“I get it, dude, but use Rachelle.” Rachelle is Marchant’s right-hand woman. She can watch the cameras at Love Inc. just as well as he can, and besides, he’s got Richard on the ground. Richard and a team of big-ass bouncers.

“Rachelle is out,” he says sourly.

“What do you mean, she’s out?” I know for a fact she lives at Love Inc., Marchant’s fluffy bunny brothel.

“I mean her sister died. Rach won’t be back till October first.”

I rub my eyes. “Then tell Priscilla Heat to wait a week.”

“She won’t.” Marchant’s voice is low, almost a growl.

“Why not?” I throw my car door open, wincing as the garage’s interior lights blink on.

As I reach up to pull the cord that turns the automatic light off, I hear another puff, a pause where Marchant hesitates. Then he lowers his voice another octave. “She wants you here, man. She wants to spend the night with you and shoot the video here all week. It’s more than a video. It’s like a doc-u-fuck-ery or something.”

I lean my hip against my ride, looking out the garage window at my waiting jet as I start to understand.

“You need the money.”

“Damnit, Marchant.” I squeeze the bridge of my nose and swallow a sigh. “When this is over, I’m chaining you to one of your beds. No more going to Tao on Rach’s admin nights, either.”

I’m backing out of the garage a minute later, wheeling around and heading out toward I-215.

MARCH AND I met at Tulane, at the frat house. I had a shitty attitude because I joined under pressure from my father, and March was a party boy, moving through sorority girls like an assembly line. I thought he was full of shit, and he thought I was an uptight prick. But somehow the next semester we got stuck in adjoining rooms, and we’ve been good since.