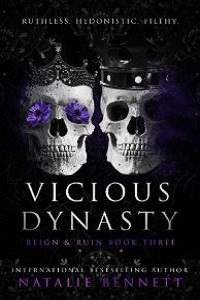 There was a photo on the mantle that depicted your above-average wealthy family. Four smiling faces were frozen in a timeless pastime. Fast forward to the present and I’m sure that with every beat of their racing hearts, they were wishing they could return to the day this picture was taken.

The Donahues were once respectable, protected, and highly admired. It was shameful that this would be how their legacy ended. They weren’t the first or the last, unfortunately, to go out this way. Too much money and not enough common sense led to a swift and brutal downfall in our world.

Tony sat at my feet, hunched over in what I imagined was agonizing pain. I would have given the man some credit for trying to comfort his hysterical wife while he bled all over his plush Tufenkian rug if not for what got us to this point in the first place.

The eldest of their two children was face down and unmoving, half his body sticking out from behind the couch. The extension cord I’d used to strangle him rested on the coffee table alongside Tony’s severed finger.

The kid’s death could have been quick and painless. It was nothing to put a single bullet between his eyes or through the back of his skull. Swift execution-style was still in these days. Instead, I graciously went out of my way and left Tony plenty of time to give us the information I needed before his son drew his last breath.

He'd remained uncooperative for a whole six fucking minutes. I counted just so there could be no discrepancies later.

It took two for his son to stop struggling, and then after he went still, I kept going for another four to make sure the little fucker didn’t have a chance of coming back.

And what did Tony do?

He did anything but give me the information I came here for. If I whipped my dick out and demanded he suck on it, he would’ve jumped to do so but giving me a combination was crossing the line. Therefore, he was the reason his child was dead—not me. I steepled my fingers and stared down at the helpless couple.

“I hate that had to happen, Tony. I don’t think either of us planned on your son dying today. Well, maybe I considered it a few times on the way here, but you get my meaning. Right?”

“I’d start talking now,” Gavin advised from where he was watching over me on the far side of the open living room.

“You’re a fucking monster,” his wife seethed and spat at my feet. Blotchy green eyes full of hatred and fear I was well accustomed to, stared into mine.

I grinned in response to her weak insult and motioned Theo over. He’d been working with us for the past two years and had a knack for doing all kinds of torture from moderate to outrageous when the situation called for it. The best thing about him, creative kill methods aside, was his loyalty.

“Get her up and onto the coffee table.”

I grabbed his hand and squeezed the nub where a middle finger once was. Blood squirted out, coating my leather glove and the sleeve of my suit. He bellowed in pain, causing spittle to fly from his mouth.