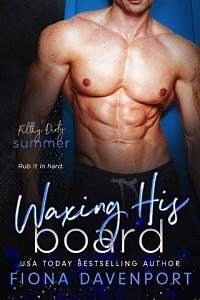 Straddling my shortboard, I rocked with the ocean's sway as I studied the waves. They were gorgeous, perfect for riding, and calling to me.

I’d been in New York visiting my sister for a couple of weeks, and the beaches near her Long Island home had been fun to surf. But no matter where I went, my favorite place to ride the sea was the beach near my house in Malibu.

My dad taught my sister and me to surf almost before we could walk. Wrenley and I both loved it, but for me, it had become my religion. I worked my ass off and officially went pro when I turned seventeen. Despite my age and rookie status that year, I earned enough points in the qualifying series to snag myself a spot on the World Championship Tour and then won more competitions than any other surfer.

There weren’t many waves I hadn’t conquered.

The swells at home certainly didn’t compare, but that was where I surfed for the love of the sport rather than the purse.

I lived on a long stretch of private beaches, so I rarely had to fight for the waves, but this morning was too perfect for me to be out there alone. Still, there weren’t many of us, and we were spread far enough that we didn’t need to worry about a single takeoff spot or creating a lineup.

After observing the break for a little longer, a pretty swell headed my way, and I decided I was ready to ride. As the wave approached, I turned the nose of my board toward the beach and lay down to begin paddling.

Movement to my left caught my attention, and I glanced over, suddenly noticing another rider in the water. And it looked as though they were planning on surfing the same wave. It was going to break on my left, but they’d been peeling in both directions this morning. It looked like this one would as well, so we could both safely ride as long as we went the opposite way.

“Going left!” they shouted, letting me know they’d made the same observation.

Refocusing on the swell, I paddled toward shore, careful to keep myself lined up correctly. The momentum was building, so I looked up and forward, using my senses to anticipate the right moment to drop in on the wave. When it hit, I pressed my hands into the board beneath my chest and jumped to my feet in one quick burst of motion.

I grinned at the thrill that raced through my body. Fuck yeah! Welcome home.

“Who is that?” I asked my friend and neighbor, Merrick, as I set the nose of my board in the sand and leaned an elbow onto the small wooden counter of the snack shack.

He glanced out at the beach full of people as he traded the cashier money for some drinks. “You’ll have to be a little more specific,” he drawled as he handed me an ice-cold bottle of water, then opened one for himself.

I laughed and nodded my thanks. Then I discreetly pointed at the woman I’d had my eye on since this morning. “The gorgeous brunette in the blue boy shorts and polka-dot bikini top.” I’d been sharing the waves with her earlier this morning and was truly impressed with her technique and innate grace. I was excited to talk to her, but when I got to shore, she’d already taken off.

I’d come to this semi-private beach where I would be shooting a commercial in the next few days if I accepted the deal my agent was working on. It was the last place I expected to run into her, but there she was. Out on my waves again.

After another couple of hours, I just couldn’t get my timing right and still hadn’t managed to talk to her. I’d spotted Merrick out on his board and followed him onto shore, hoping he could help.

Merrick peered in the direction I was pointing. “The one with the yellow shortboard?”

“How the fuck would I know?” he grunted. I couldn’t see his dark eyes behind his shades, but I knew he was rolling them.

I shrugged. “You always seem to know random shit. It’s creepy, but it can come in handy.”

Merrick was a former SEAL who’d gone into security after leaving the service—which had been precipitated by a betrayal that had almost cost him his life and those on his team. He’d hung up his silencer when he met his wife, Audrey, but he never lost the sharp edge to his personality or senses, and he always seemed to know who and what was happening around him.

Audrey walked around the corner and smiled at her husband when he handed her a frosted lemonade. “What’s up?”

“Pretty boy wants to know who that chick is,” Merrick explained, his voice suddenly soft—a tone he only used with his wife—and pointed at the girl I was curious about.