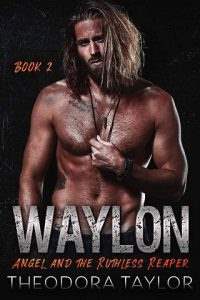 I come awake with the smell of leather in my nose and the growl of thunder in my ears.

My eyes pop open when I realize that I’m on the back of a motorcycle, zooming down a dark country road and holding on to someone…

Waylon, the man I had only ever agreed to run away with in my dreams.

But here I am, on the back of his bike. And this isn't a dream.

I've never been on a motorcycle before today. So, there’s no way I would have been able to conjure up the sensation of speeding down an empty road at too many miles per hour. I’m either super sore or super stiff everywhere—my forearms, my inner thighs, that place between my shoulder blades that I can never reach by myself. My ass somehow feels like it’s on fire and completely numb at the same time. And the bike’s rumbling vibration only makes everything feel worse.

How had I even managed to fall asleep on the back of this monster while still holding onto Waylon so tight? Even more important than that, why was I here?

The answer to that last question comes back to me in a flash of chaotic memories….

Waylon pointing the gun at Jonathan.

Both Jonathan and me begging him not to shoot.

Lowering the gun and saying, “Anything?”

Me swallowing and nodding, too mute to speak.

And him staring at me for the longest time before declaring, “All right then. We tried doing it your way. Now we're going to do it mine.”

Him putting the gun away and holding out his hand. To me.

I took his hand, I recall as the sleep falls away. Too afraid of what he would do if I refused.

I followed him out of the church's side entrance, where he’d left his huge bike—a black and chrome monster with a Harley-Davidson attached to the side of its tank.

It sat in a spot clearly labeled NO PARKING in huge yellow block letters. And it faced the highway as if it had known way before I did that it would be used as a getaway vehicle.

I’d only just begun to wonder how I was supposed to climb onto the huge bike in my wedding dress when Waylon lifted me up and plopped me down on its raised backseat—not with any kind of gentlemanly intention, I sensed. It had simply been the easiest way to get my butt in the seat.

He climbed on in front of me without a word. I figured out the hard, nearly falling off way that I should hold on tight to his waist as we roared away from the church like actors in a romantic comedy.

But this isn’t a romantic comedy. Not in the slightest. We've been driving for hours and hours. Waylon has yet to say a word beyond a single grunted “bathroom” the one time we stopped to get gas. But I can only assume he wanted to put several states between us before the police came looking for the guy who beat Dr. America to a pulp before running off with his bride.

That question comes back with a vengeance, blaring inside my ears even louder than the engine as Waylon turns down a side road.

We slow, then come to a stop outside…

Actually, I’m not quite sure where the hell we are. I’d spotted a West Virginia sign the last time we stopped for gas. But I couldn’t tell you what state we were in now.

“Why are we stopping here?” I ask.

Waylon takes off his helmet and shakes out his rust-colored tiger hair. Then he holds his hand out for my helmet.

After the last couple of gas-and-potty breaks, I know the routine. I take off my helmet and hand it to him, then brace myself carefully with a hand on each of his shoulders as he lifts me off the bike.

But this time, I don’t think we're simply stopping for fuel and a bathroom.

There are a few pumps with motorcycles lined up next to them. But otherwise, it appears to be mostly a two-story wood building with all the lights turned on and loud country music pouring out from inside.

Some kind of biker bar, maybe? Several shiny motorcycles are parked in front, and their chrome finishes glint under the building’s lights.

Roadhouse. The word, which I’ve only ever associated with road trip comedies, featuring hapless male characters who end up in the wrong place seems to fit this structure to a T.

We left so fast, I was forced to abandon my purse with my phone and wallet inside the church. But even if I had my Samsung, I sense this isn’t the kind of place with Yelp reviews.