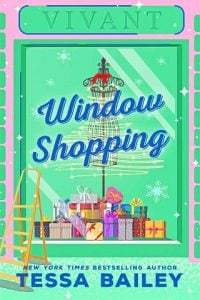 Normally, I avoid Fifth Avenue. But not today. I’ll never be able to explain why I deviated from my route and veered down the bustling thoroughfare of high-end shopping.

If I was a girl who believed in magic, I would say there was a tingle of Christmas magic in the air that propelled me east, carrying me through the shopper’s paradise on a wintery gust of wind. Or I would say Santa’s elves were nipping at my heels, urging me to this exact spot where I’m now standing transfixed by the giant display window outside of Vivant. But magic is for suckers and children, so that can’t be it. Maybe I was just ready to look again.

A pedestrian tries to overtake the slow walker in front of them and doesn’t quite make it in time before reaching where I stand, a roadblock dressed in black and severely lacking in anything resembling holiday spirit, thus knocking into me at full speed with his shoulder.

I bite down on my tongue to quell the words NEEDLE DICK that want to come flying out of my mouth like darts toward a bullseye. What would Dr. Skinner tell me? Don’t trade emotional currency with strangers. You will never get a refund. Skinner might have smelled like moldy granola, but she did have some good advice from time to time. Following that counsel is how—in the twist of the century—I got released from Bedford Hills Correctional early for exemplary behavior.

If I was in one of my many mandatory counseling sessions right now, my former beatnik shrink would tell me to take myself out of this situation that has potential to irritate me.

Galled to find out therapy actually worked, I step out of the flow of foot traffic, bringing myself inches away from the display window. Looking up at it, my nose wrinkles of its own accord and not because the combined scents of hot roasted nuts and boiling hot dog water are so prevalent on this block. But because I can’t for the life of me figure out what the window dresser was going for here.

On the other side of the glass, an assembly line has been recreated. Penguins are dressed in little red white-fur-trimmed jumpsuits and they are putting toys together as they come down the trundling rubber belt. Of course, the penguins are mechanical, so they only complete one awkward swivel, then revert to their original position, their expressions frozen in a sort of maniacal glee. It’s a scene straight out of a child’s nightmare. The only way it could be worse involves penguins getting maimed by machinery. A little sign would unfurl above the crime scene reading it has been zero days since our last accident.

My mouth twitches, reflecting back at me from the smudge-proof glass.

“Uh oh,” says a resonant timbre to my left. “See, I was going to mind my business and keep moving, but you went ahead and smiled. Now I have to know what you’re thinking.”

“That wasn’t a smile,” I blurt automatically, outraged that someone thinks they caught me—me?—engaging in anything but hostile judgy-ness. Not likely. But my words trail off when I lay eyes on my accuser.

What in the fresh living hell?

I’m not rendered speechless by many things, but this giant man in a candy cane bow tie and a beaming smile makes me wonder if I’m hallucinating. No one is shoulder bumping this dude. They couldn’t reach that high. Not to mention, he has completely shifted the flow of foot traffic—and when he realizes he’s making himself an obstacle, this very tall, very broad-chested stranger hops out of the sidewalk intersection with a few sorry, ma’ams and apologies, sirs.

In his hand, he’s holding a blue and white paper coffee cup, his long, thick fingers stretching the entire distance around. Deep brown hair with a slight curl to it waves in the wind. I’d put his age at thirty-two, give or take a year. He’s drenched in a practiced kind of success and that takes time to acquire. His suit is impeccable. Navy blue, complete with a crisp, white pocket square. Nary a wrinkle. But the most remarkable thing about him is those smile lines. They bracket his mouth, they fan out from the corners of his eyes. They are deep and worn-in like a pair of jeans that have been washed seven hundred times.

“If that wasn’t a smile, what was it?” Somehow he takes a sip of his coffee without dimming the wattage of his smile. “A twitch or something? My uncle Hank had one of those. Used to spill beer all over Aunt Edna’s carpet, thanks to that tic. One day she got so mad about it, she walloped him over the head with a colander and the damn twitch went away.” He gestures with his cup. “Like flipping off a light switch. After that, he just spilled beer for the tradition of it.” He pauses. “Aunt Edna eventually remarried.”