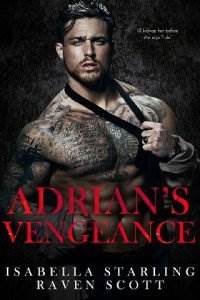 "Hey, it's the outcast! Outcast, reietto!"

Laughter follows the cruel words, filling the streets of the docks with its melodic tone. I grit my teeth together and do my best to ignore the mean boys like papa told me to. But they're determined to be heard, especially one of them, the one who hates me the most. When I look up from the water, a boy a couple years older than me is standing above me, smirking down with a disgusted expression. Like I'm nothing but trash.

Quickly, I raise myself until I'm standing up and we're facing-off. I can take Vitto. I don't care if he's a Donati. He's got nothing on me.

He curls his lips up in disgust. "Dirty mouth on a dirty kid. What are you doing here, Bernardi? I thought I told you and your brothers not to come to the docks anymore."

"You don't own the world, Donati." We face off and he smirks at me. He knows he's got a one up on me. He may not owe the world, but his family owns the docks, which makes them royalty in Palermo, and he knows that as well as I do.

"You're treading on dangerous ground," he grinds out. "Watch your step around here, reietto. Wouldn't want to hurt yourself. This is a dangerous place, especially when someone like me doesn't want you here."

"My papa tells your papa what to do, though," he smirks at me. "And he won't like hearing about this one bit."

I stare at him sullenly, knowing full-well how right he is. Papa did tell me to be on my best behavior while he went for a meeting in the offices here at the docks. He won't be pleased to know I acted out. Again. I swallow thickly, knowing full well I can't fight this boy. But dio, the temptation is there. I want to smash his face into the dirty ground.

"So, reietto. You better get the fuck out of here before I make you." Vitto steps forward, his face a menacing snarl as he advances on me. "You're nothing but trash, Adrian. You're not even a real Italian. Papa told me all about you. You're not even Bernardi blood."

I take a deep breath like papa taught me. I count to five. But none of it helps, and before I can stop myself, I've launched my body at the older boy, fists hammering against his chest. I'm smaller than him, but that also means I'm quicker. And I can tell Vitto doesn't have any fighting experience, unlike me. Growing up with four brothers will do that.

His screams ring out in the docks, and suddenly, the figures of four other boys round the corner. Merda. It's Vitto's gang of preppy friends. I can take one of them, but I can't take five. Still, my brain doesn't accept this fact, and as Vitto's cries ring out in the alleyway I've dragged him to, two of the other boys drag me off him. I'm kicking, spitting and screaming as they hold me back and Vitto advances on me with maddened eyes.

"Who the fuck do you think you are?" he snarls at me. "My father will hear about this."

"Pussy," I smirk at him. "Letting your papa do your dirty work for you. What a weakling."

I can tell even the other boys are nervous, knowing Vitto won't let me go easily. And as he approaches me with a wicked grin, I know I'll be counting my broken bones in no time. But still I can't force myself to stop. The moment he's close enough, I spit at him, watching with dark satisfaction as my saliva dribbles down his cheek. He wipes it away with disgust and throws the first punch.

I don't make a fucking sound, but we all hear bones crunching as the punch lands on my nose. Instead of responding to Vitto's pathetic attempt to hurt me, I stare at him with burning hatred in my eyes. "Is that all you fucking got?"

"Cazzo," he mutters, preparing to deal another punch when a timid voice interrupts him.

I raise my head, ignoring the drip of blood down my face. That's when I see her for the first time. She's wearing a red dress with polka dots and black lacquered shoes. Her hair is neatly braided into a long plait falling down her back, with tendrils escaping the tightness and framing her pretty face. She's young. Too young to be here, and too young for Vitto to listen to her. And yet the moment she speaks up, we're all enamored. The boys holding me loosen their grip on my arms and I struggle out of their grasp, groaning as I reach to my broken nose.