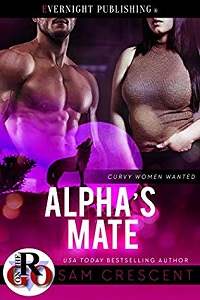 Beast Smith stared across the parking lot where Suzy Cain was loading up her van to deliver the day’s sandwiches. The town of Ville housed some of the deadliest werewolves in the country. It was a pack that he was the alpha of, and because of that, he couldn’t allow himself to be weak.

Suzy was a weak wolf.

She didn’t dominate or force her hand for power. She took her time with everyone. To the pack, she was the caring mother they all wanted to be. No matter what people wanted, she was there for them.

What made it so hard for him to look away was Suzy was also his mate. But her wolf gene was so weak that she couldn’t even sense he was her mate.

There were so many women within the pack that would hunger for his touch, for his attention, and yet it was little Suzy, the young woman he always saw as weak and worried about constantly because she couldn’t defend herself, who was in fact his mate.

If he let anyone know that she was his mate, women would challenge her for the right to be by his side, he was sure of it.

Since he was the most feared alpha in all the land, women were drawn to him and to the power he held within his grasp.

No other alpha could force a wolf to change on a whim. He controlled his beast, unlike most of the men and women within Ville, who were always at the mercy of their monster.

Climbing out of his car, he knew the pack sensed his presence.

Just because he couldn’t claim Suzy didn’t mean he wasn’t drawn to her wherever she was.

She had just finished loading the last of the sandwiches, which would be filled with all kinds of meats and cheeses.

The moment he approached, she tensed up.

“Alpha,” she said, casting her eyes downward as a sign of respect and bowing her head slightly.

She’d be overflowing in no time with how badly he wanted to mate with her.

“Suzy.” He voiced her name but said nothing more. He inhaled sharply, his mouth watering at the hint of vanilla and cinnamon.

She loved to bake, and well, he loved to scent her. She truly was … a beauty.

Her long, black locks would look so good wrapped around his fist as he fucked her. She was a curvy woman as well. Big, juicy-looking thighs that would hold him as he plowed into her. A rounded stomach he wanted to see full with his babies. Big, ripe tits he thought about sucking every second of every day. Well, most of the time he thought about it. He couldn’t have his way though, even if he wanted to. He had to always be a good boy.

He noticed her hands shook a little. This was the only thing he hated about himself, his ability to make someone as sweet and nice as Suzy fear him.

“Anything.” He’d eat anything she had touched.

“Okay. I know you love ham and cheese with all the extras.” She hummed and then pulled out a long, baguette-looking one. “Here you go. Freshly made today.”

“Yes. I even prepared all the sandwiches.”

Since he had discovered this woman was his mate, he could only eat food made and prepared by her. He didn’t know why, but he had a real distaste for anything made by another woman. He wasn’t going to complain.

She was meticulous, a fabulous baker and cook.

The men and women in the pack adored her.

If he didn’t have some evil, spiteful bitches vying for his affection, he would have claimed her already. First, he had to make sure she was protected.

With her being weak, he couldn’t allow another woman to touch her, to even think for a single second they could hurt her. He would slaughter anyone who thought they could take his woman away from him.

Suzy didn’t realize it yet, but she would belong to him soon.

He wasn’t going to put her at risk though.

“Will you be coming to the dance tonight?” Suzy asked.

“It’s the last Friday before the full moon. We all have the monthly dance where we relax, have fun.”

“You don’t turn with the full moon.”

“I know, but I like to walk during that time.”

He sensed the shame, and he wanted to do nothing more than hold her close and let her know she would have nothing to fear.

Out of the entire pack, she was the only one who hadn’t been able to turn into a wolf. Parts of her could. He’d seen them, a hand, a foot, her face, but she had never been able to succumb to the pressures of the full moon.