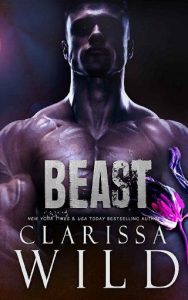 He has a beastly instinct to devour everything in his path … until her.
I am the giant, menacing monster, known only as the Beast.
Sold to the mafia as a kid and trained to hunt, my life revolves around brutality and carnage.
My home is a cell made of concrete and iron bars.
And there is nothing I won’t do to be free.
Until her.
The innocent black-haired girl with pretty pink lips, whose father I was supposed to hunt, dares to get in my way.
But when I grab her and look into her eyes, I can’t bring myself to finish the job.
She makes me feel hope. Greed.
And a frenzied desire to touch her.
Taste her.
Make her mine.
I was supposed to destroy everything in my path.
Instead, I took her … and consumed her whole.

My world is shuttered in darkness.

Behind these bars, I become one with the shadows.

The door at the top of the stairs opens, and a sliver of light is cast down into my cell.

Huddled in the corner, I stay put, eyes half-closed but vigilant.

Two feet slowly appear, as though it costs him great trouble to even walk. Then the rest of his body reveals itself, his chest rising and falling with each step as if even coming down here costs him a great deal.

I watch as his wrinkly face comes into view. His lip curls up, barely taking the time to form the word as he spews it. “Beast.”

My nostrils flare at the sound of his voice. At the beckoning and my mandatory call.

But I stay put in my cell, watching him from afar.

A filthy smile appears on his face. “I have a job for you.”

His hand dives into his pocket, and he pulls out a photograph of what appears to be a family of just two. A man with a potbelly and a beard just like my owner’s and a girl with her back toward the camera, huddled over a piano.

My owner approaches my cell and presses the photograph against the bars. “Bring me his head.”

I step out from the shadows and into the light. Every footstep is another thud on the stone ground beneath my feet. His body quakes the closer I get until my frame towers over his. Until the only thing separating us are thick metal rods.

I snatch the photograph from his hand and study the image carefully, taking in every detail. The colors, the view behind the window, the man’s wretched smile … and the girl’s beautiful, flowing black hair that reminds me of the sea of shadows I call home.

A small strand of hair tucks behind her ear, and an inch of her blushed cheeks are visible, along with the edge of rose coral lips hiding behind the veil of darkness.

A hint of a smile.

“Kill anyone who gets in your way.”

My eyes flicker up to meet his. “Anyone?”

It’s all I’ve ever known.

All I’ve ever understood.

The only thing that will ever get me where I want to be.

I open the door at the last slap and peek through the narrow gap. Downstairs, my father’s raised fist makes my heart beat faster as he shakes the blood off his knuckles.

“I swear, we didn’t know,” the man on his knees in front of him says.

His face is bloodied and mauled.

“Disgusting.” My father spits on him. “I should’ve known better than to trust you with this fucking shipment.”

“We were ambushed!” the man replies.

The hit is so hard and fast that the man’s whole body turns sideways, and his eyes meet mine.

I gasp and close the door for a second, calming my speeding heart.

But I can never fight the urge to look.

“I’m sorry,” the man mutters as I peer downstairs again.

“You should be. Do you know what this will cost me?” my father yelps. “EVERYTHING!”

The man hurriedly gets up and runs outside, leaving bloodied handprints all over the door. My father wipes the back of his hands on a napkin. Then his eyes connect with mine.

I hold my breath, close my eyes, and shut the door.

Sighing out loud, I frown, slapping my forehead. “Stupid, stupid, stupid!” I mutter to myself.

“Come here.” My father’s monotonous voice forces me to open the door again and take in the full brunt of his disappointment in me.

His eyes narrow when they meet mine, and I swiftly close the door behind me and walk down the stairs.

“Didn’t I tell you not to eavesdrop on my business?” he says.