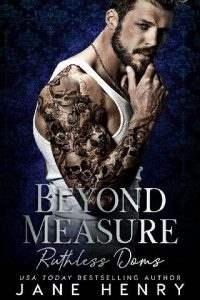 I scowl at the computer screen in front of me. As pakhan, the weight of everything falls onto my shoulders, and today is one day when I wish I could shrug it off.

A knock comes at my office door.

“Who is it?” I snap. I don’t want to see or hear anything right now. I’m pissed off, and I haven’t had time to compose myself. As the leader of the Boston Bratva, it’s imperative that I maintain composure.

Nicolai can withstand my anger and rage. Over the past few months, he’s become my most trusted advisor. My friend.

The door swings open and Nicolai enters, bowing his head politely to greet me.

When I first met Nicolai, he wore the face of a much older man. Troubled and anguished, he was in the throes of fighting for his woman. The woman who now bears his name and his baby. But I’ve watched the worry lines around his eyes diminish, his smile become more ready. While every bit as fierce and determined to dutifully fill his role as ever, he’s grown softer because of Marissa, more devoted to her.

“You look thrilled,” he says, quirking a brow at me. Unlike my other men, who often quake in my presence, having been taught by my father before me that men in authority are to be feared and obeyed, Nicolai is more relaxed. He’s earned the title of brother more readily than even my most trusted allies.

“Fucking pissed,” I tell him, pushing up from my desk and heading to the sideboard. I pour myself a shot of vodka. It’s eleven o’clock in the fucking morning, but it doesn’t matter. I’ve been up all night. “Drink?”

He nods silently and takes the proffered shot glass. We raise our drinks and toss them back together. I take in a deep breath and place the glass back on the sideboard before I go back to my desk.

“Want to tell Uncle Nicolai your troubles?” he asks, his eyes twinkling.

I roll my eyes at him.

I made an unconventional decision when I inducted Nicolai into our brotherhood. The son of another pakhan, Nicolai came here under an alias, but I knew he had the integrity of a brother I wanted in my order. I offered him dual enrollment in both groups, under both the authority of his father and me, and he readily agreed. We’ve come to be good friends, and I would trust the man with my life.

“Uncle Nicolai,” I snort, shaking my head. None of my other brothers take liberties like Nicolai does, but none are as trustworthy and loyal as him, so he gets away with giving me shit unlike anyone else. “It’s fucking Aren Koslov.”

Nicolai grimaces. “Fucking Aren Koslov,” he mutters in commiseration. “What’d the bastard do now?” He shakes his head. “Give me one good reason to beat his ass and I’ll take the next red-eye to San Diego.”

He would, too. Nicolai inspires fear in our enemies and respect in our contemporaries. Aren falls into both categories.

“Owed me a fucking mint a month ago, and hasn’t paid up,” I tell him. I spin my monitor around to show him the number in red. “And you don’t need me to tell you we need that money.” As my most trusted advisor, Nicolai knows we’re right on the cusp of securing the next alliance with the Spanish drug cartel. Our location in Boston, near the wharf and airport, puts us in the perfect position to manage imports, but the buy-in is fucking huge. We have the upfront money, but the payout from San Diego would put us in a moderately better financial position.

Nicolai leans back in his chair, rubbing his hand across his jawline.

“And you have meeting after meeting coming up with politicians, leaders, and the like.”

I eye him warily. Where’s he going with this?

“It’s easy to say you need money. But that isn’t what you need, brother.”

I roll my eyes. “I suppose you’re going to tell me what I need.”

“You know what you need more than the money?” he asks. I’m growing impatient. He needs to come out with it already.

I give him a look that says spill.

I roll my eyes and shake my head. “Sometimes I think your father dropped you on your head as a child,” I tell him. What bullshit. I look back at the computer screen, but Nicolai presses on.

“Tomas, listen to me,” he says, insistent. “Money comes and goes, and you know that. Tomorrow you could seal a deal with the arms trade you’ve been working, and you know our investments have been paying off in spades. But a good wife is beyond measure, and Aren has a sister.”

“You’ve been married, for what, two fucking days and you’re giving me this shit?” I reply, but my mind is already spinning with what he’s saying. I never dismiss Nicolai’s suggestions without really weighing my options. Aren is one of the youngest brigadiers in America and has a reputation that precedes him everywhere he goes. He commands men under him, and I’m grateful he hasn’t risen higher in power.