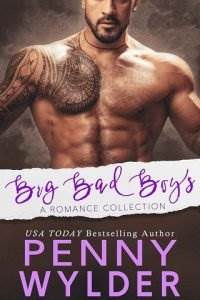 “Your fiancé is this way, Ms. Marrón.”

That word, fiancé, makes me startle for a second. I don’t have one, of course. Not really. But this prison guard doesn’t know that. In order to meet one-on-one with the inmate I need to speak to, I needed a viable disguise. Posing as his fiancée was the easiest and most convincing, option. That’s why Dad sent me. None of his other “business associates”—big, burly men who are more accustomed to beating the answer they want out of someone rather than negotiating—fit the bill.

So I paste a broad smile on my face. “Thank you. How much time will we have in visitation?”

“Half an hour,” the guard says with a glance over his shoulder at me, sizing me up. His eyes linger on my chest, which makes me feel suddenly self-conscious, but I don’t cross my arms or back down.

Half an hour. Half an hour to get the information I need from this criminal.

I square my shoulders. You can do this, Ashley.

“Private visitation is unusual,” the guard comments as we continue to stroll down the corridor. “You two must have friends in high places.”

You could say that. In truth, my father arranged this meeting. Pulled some strings with his friends in the prison sector. Normally even a fiancée’s visit to the prison would be heavily monitored. But we’ll be left alone. Just Damon Tell and me.

Damon Tell, the bastard who screwed my father over, and killed an innocent man in the process.

I tighten my fists even as I smile politely and nod at the guard. “We’re very lucky,” I tell him as he leads me through the hallways of Upton State Penitentiary. “Warden Andrews is a family friend. He understands why I’d like some privacy when I speak to Damon.”

“I’ll bet he does,” the guard replies with a leer that turns my stomach.

Upton State Penitentiary is home to the most notorious and ruthless criminals in the tri-state area. Full of mobsters and murderers alike.

Lucky me, my so-called fiancé is both.

I spread my arms as the guard goes through the pat-down routine.

It’s not my first visit to Upton. The last time I was here, when I was only five years old, I held hands with my mother as she got this same pat-down on the way to visit my father. Now I’m twenty-three, Mom’s seven years in her grave, and Dad? Well, he’s still up to the same business that landed him in here way back then. Mostly racketeering, fixing races at the local tracks. Some petty theft. The occasional bank heist when money gets really tight at home. It’s not honest work, no, but it’s the family business. Has been for generations. And Dad is an honorable thief, at least. He gives back—hires his thugs from our local community shelters, tries to give back where we can.

My father is a mob boss, you see—a criminal and a thief—but he’s an honorable one.

“She’s clear,” the guard announces, and another guard buzzes open a clear glass door, then waves me through. I step into the room. It’s mirrored on one side, and that makes me hesitate, checking over my shoulder at the guard. “Don’t worry,” he replies, sensing my question as I face the darkened glass panel. “There’s nobody behind the mirror. Not today. You’ve got the place to yourself. Like I said, half an hour.”

“Have fun,” he adds with a smirk as he waves me inside. I can feel his gaze lingering on me, even with my back turned.

I dressed as demurely as I could for this, in a long pencil skirt and a blouse that hints at my assets, but doesn’t actually reveal anything. But that doesn’t stop the guard from staring. I shoot him as haughty a glare as I can muster, then enter the room to greet my target.

He worked a few jobs with Dad over the last year. Enough to earn my father’s trust. Then, a few months ago, Dad set up a big job. We’d taken heavy losses in the winter season—times were hard, nobody was gambling much, and a few of our usual fixed races decided to go straight. We were struggling to make ends meet, to keep employing all the men on our payroll, and to make enough to keep the bigger mafia bosses out of my father’s territory.

So Dad decided to rob a bank.

He took his time planning it. Found a local bank without a lot of the high-end security you need to deal with at some of the bigger corporate chains. Got to know the owner, his routine, and found a pretty easy in. Every Saturday, the owner went in an hour before opening to personally inspect his safes. That was our opening. Sneak a man in, hold him up while the bank is empty, clean out the vaults, and get out without any collateral damage. No need to put innocent bystanders in harm’s way unnecessarily.