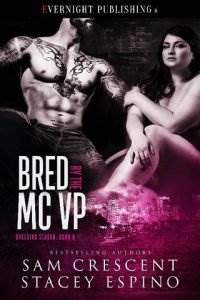 “None of you have anything better to do?” Dog glared at the growing group of onlookers.

He ran his free hand through his hair, trying his best to keep still. He’d been sitting on the stool in the main yard for over three hours, so he wasn’t in the best mood.

One of the old ladies was giving him his latest tattoo, an intricate collage of skulls on his left bicep. She’d been doing ink for decades, and this was the fourth time he’d been her canvas. He glanced at his arm as the crowd dispersed, thankful that the artwork looked about finished. It was better than he expected. Right now, all he wanted to do was get out of the hot yard and grab a cold beer.

He’d already told everyone to fuck off. Dog didn’t appreciate an audience when he was hot, uncomfortable, and edgy from the needles. When he noticed it was Sable, his anger melted away. She was his only weakness.

She nodded, walking around the tree stump they used as a table to take in every angle. When she came up behind him, she ran her fingertips along his shoulder, bringing his entire body to life. He sat straighter on the stool, adjusting his stance. “Good job, Patty. I think this is your best work yet,” she said.

“Thanks, sweetheart. When you going to let me do you?”

“You don’t need any work done. You’re perfect the way you are,” said Dog.

There was a stretch of awkward silence.

“Old Dog playing with kittens?” said Patty. She coughed as soon as she started laughing. Her voice rough from a lifetime of smoking. The old bitch didn’t know when to keep her mouth shut. Dog was the VP of the Hell’s Slaves MC, so she wasn’t too bright pissing him off—old lady or not.

“You finished? You sound like you’re going to cough up a fucking lung.” Yes, he was twenty years older than Sable, but he never said he was claiming the twenty-six-year-old. Any attraction he had was bottled up and on the shelf.

Patty kept her mouth shut and cleaned off his arm. Dog stood up, stretching out all his cramped muscles. Sable was still there, but he walked back to the clubhouse, ignoring her.

“How long did the tattoo take?” she asked.

“No fucking clue. Too long.”

She tagged along with him. He remembered when she was an awkward teen. Sable was all grown up now—loads of curves, perfect features, and soft pale skin. He stopped just before going inside. Dog tried to replicate disinterest with Sable, like he did almost every day of his life, but it was impossible when she looked at him with those big doe brown eyes. She pulled her dark hair around to one side of her body. Whenever she was nervous, she’d twirl and fiddle with it.

Sable was a club whore, the same as her mother and sister. That meant she wasn’t to be taken seriously. She was pussy for the brothers to share. He could take her right now. Tell her to get upstairs in his bed and spread her legs. But something always held him back.

He wanted something more and that could never happen with Sable. Maybe in a different lifetime, but not this one. He’d be laughed out of the fucking club if he attempted to take club pussy as his old lady. He’d be a joke.

She blocked the entrance with her body.

“You’ve hardly talked to me since the shootings. I miss you, Dog. Did I do something wrong?”

It had been almost a year since the club was shot up. Several of them had gunshot wounds, including him, the prez, and Sable. Ever since that day, he realized how important she was to him. They’d almost lost her. He’d spent months helping her rehabilitate, even with his leg fucked up. She’d worried about the scars and had a fear of guns for a while—and he’d helped her through it all. He wished he could protect her forever.

Of course, being a nice guy had worked against him.

His feelings for the young beauty had to be doused, and the only way he knew how to do that was to keep his distance—out of sight, out of mind.

It wasn’t so easy.

“You’ve done nothing wrong. You saved Beth’s life. Everyone respects what you did for the club.”

“That’s not what I meant. I’m talking about you and me. We used to be closer, even more after the shooting, and now you can’t stand to look at me.”

He couldn’t do this. Nothing could happen between them, so his entire conversation was pointless. Dog fought the frog growing in his throat. “We all have our roles to play here, Sable. I have a club to run, you have men to fuck.”