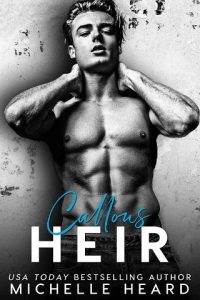 I’ve watched so many motivational videos on YouTube, looking for the meaning of love. None of them could really answer me. Some say it’s hormonal. Others say it’s a spiritual connection with another soul. All speculations, though.

Why do I look at Noah West and feel like I might die if he doesn’t love me back?

My eyes trace every inch of his body. He’s all hard muscle with an air of I-don’t-give-a-fuck giving him an edge.

His dark blonde hair, hazel eyes, and the constant grin tugging at the corner of his mouth… sigh. Add that he has an IQ of between one hundred and sixty and two hundred, depending on which test you go with, and the man is damn near perfect.

But that edge. God, that edge draws me in like an addiction. I’m hooked, living for my next fix of when I’ll get to lay eyes on Noah again.

Right now, I’m high on the sight of him, where he’s standing near the barbeque, talking with Jase, Hunter, and Kao. Everyone’s here to celebrate Jase turning twenty.

I watch as Noah laughs at something my brother Jase says. Sigh. He glances toward the veranda, and as he turns to walk inside, I get up and follow him.

Now’s my chance to get him alone.

I watch as he goes into the restroom, and I wait at the end of the hallway with my heart stuck in my throat. I glance around, making sure there’s no one else nearby. I rub my sweaty hands on my jeans and take a couple of deep breaths.

My heart thumps faster from both nerves and excitement.

When the door to the restroom opens and light spills into the hallway, I want to slap my forehead for not switching on a light. Standing like a creep in the shadows, my voice sounds like I sucked on helium as I say, “Noah. Can we talk?”

His head snaps my way, and he instantly frowns. “Why are you standing in the dark?”

I move closer and turn on the light, and then I wring my hands nervously. “Ah, there’s something I want to say to you.”

The frown doesn’t leave his face but instead deepens. “Yeah, I think it would be better if you didn’t tell me anything.”

His words surprise me. “But you don’t know what I was about to say.”

His beautiful hazel eyes narrow on me, and then he grumbles, “Yes, I do.”

Noah begins to turn away from me, and it has me blurting, “I love you.”

He freezes, and he lets out an annoyed sigh. Turning back to me, he shakes his head, and his eyes lock with mine.

His expression is irritated and cold, making my heart lurch to my throat.

Then he mutters, “I’m not a pedophile. Date someone your own age.”

I watch him walk away, and it takes a couple of seconds for his words to sink in. Then my world implodes, the ground opens up, everything that was perfect in my life shatters into an aching mess.

I gasp for air and fight to keep control over the devastation wreaking havoc in my heart. Darting down the hallway, I rush up the stairs so I can get to the privacy of my bedroom.

When I shut the door behind me, I fall on my bed and bury my face in my pillows. Sobs begin to shudder through me as my heart breaks.

He was so mean. God, if he doesn’t feel the same, he could’ve at least been gentle about the whole thing.

Realizing Noah just outright rejected me without even caring about my emotions makes me feel like I don’t matter at all.

I try to silence my sobs as my first love goes up in flames. It scorches all my dreams and hopes, and not even my tears can extinguish the inferno of heartbreak.

Watching Carla run up the stairs, I feel like shit.

Fuck, why did she have to go and do that?

I’ve picked up on the stares filled with longing and the interest in her eyes. But shit, she’s fifteen, nothing more than jailbait. Hell no, I can’t even bring myself to think of her as a young woman. To me, she’ll always be the little girl with pigtails and a defiant streak. I shake my head and let out a heavy breath.

I hate that I had to hurt her, but she has Reyes’ blood in her veins, which means she wouldn’t give up otherwise. I had to be direct, even if it was brutal.

Yeah, Carla is gorgeous, and if she was older, or I was younger… who knows. I shake my head again, stopping my thoughts dead in their tracks.

She’s fifteen. A kid. A definite hell no.

I walk over to where Kao’s standing with the rest of the group and say, “I’m heading back to the suite.”